While it is far from being the last word on the matter, the new study by researchers of the University of the Basque Country adds some important information to our knowledge of the main European R1b subhaplogroup S116, which dominates much of the continent with a south-western centrality, spanning from Ireland to Italy and from Iberia to Germany.

Preliminary status of the research

The improvement of the knowledge of this major European lineage had been stuck, as far as I know, since the various studies published in 2010, notably Myres et al. (discussed HERE). At risk of repeating myself, I will again display here some of the maps derived from the data of that key paper, as they are very useful references for discussing the new one:

The new study is not as comprehensive in their sampling as that of Myres, so it heavily relies in previously published data, which is enough for the already studied subclades. The resulting maps are however somewhat different from Myres, because a lot newer Basque and Iberian data is present here (Myres did not sample Basques, whose frequencies and diversity for S116 are outstanding):

They do however consider a third major sublineage of S116, defined by the mutation DF27, which is strongest among Basques and other SW Europeans. They also considered a sublineage described by the SNP L238 but only could find a single individual carrying it (a Breton from Brest), so it should be considered as part of the wider S116* paragroup and not relevant on its own. 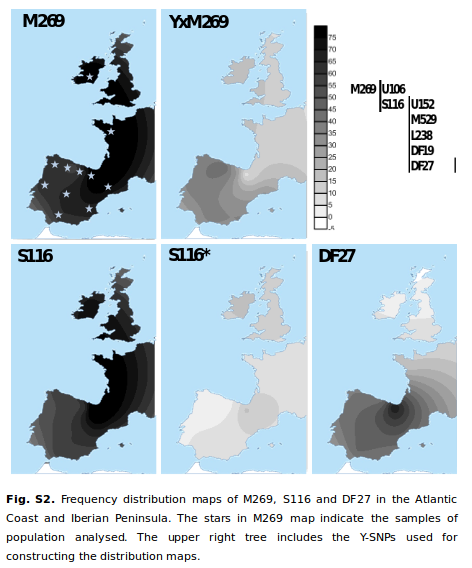 An important detail is that, after excluding the three major subhaplogroups, the remaining S116* seems concentrated in Ireland and the Basque Country. However we should await for new information that could come from France, Southern Germany or even parts of England in the future (these areas showed some notable S116* in Myres 2010 but DF27 was not excluded then).

In this sense it must be mentioned that a sublineage of DF27 (SRY2627) has been known since more a decade ago, before even the modern nomenclature arose in 2001 (Rosser 2000 called it Hg22), and was indeed spotted not just among Basques but also among some Bavarians. So I would not dare to exclude at least some presence of DF27 further northeast than what this study shows. However it is indeed clear that its primary distribution is in Iberia and particularly among Basques.

It is also important to underline that the maps may be a bit misleading because of the existence of two different Basque samples: a rural one (mostly with Basque surnames) with overall R1b and also S116* frequencies similar to the Irish and a urban one (of more mixed ancestry) with somewhat lower frequencies.

From the supplementary material I gather that Basques have the following frequencies (green: rural Basques, blue: urban Basques):
Otherwise the frequency of S116* is most notable among the Irish (18%) and Central-East Iberians (8-12%) but lower in Brittany (6%), Cantabria (6%) and Portugal (4%), being absent in Galicia and Asturias.

The frequency of M529 is very high among Irish (54%) and Bretons (52%) but under 5% everywhere else, except the following: 6% in both Asturias and in Cantabria, 7% among Galicians. The lineage is present in all sampled populations except Alicante and Andalusia. Therefore, inside Iberia, it shows some NW-SE clinality.

The frequency of U152 is under 10% across the board but also found in all sampled populations. The lowest ones are urban Basques (1%) and the highest ones Galicians and Asturians (9% and 8% respectively).

Note: figures above corrected (Jun 22) because there was a confusion between Cantabrians and Galicians in the first version of this entry. Thanks to Cousso for noticing.

In the original entry I wrote here that I had found very striking a very sharp contrast between Basques, on one side, and Cantabrians and Asturians on the other. This was wrong because I committed an error in parsing to notes and confused therefore Cantabrians with Galicians. Hence the "sharp contrast" at the Western edge of the Basque Country is not so sharp after all, because Cantabrians act as buffer. There is still a curious contrast between Basques and the old Gallaecia province (later also Suabian Kingdom and Kingdom of Asturias-León), that is: Galicians+Asturians. These show the highest peninsular frequencies of M529 and U152, while Basques only have low frequencies of them; even more significantly maybe Basques have one of the highest S116* frequency in Iberia (just below the Irish in the overall sample), while Galicians and Asturians have none of it. In any case all this is reminiscent of the overall genetic contrast between West Iberia and the rest of the peninsula mentioned in other occasions, contrast that affects many haplogroups but not all.
[Paragraph edited: Jun 22].

The other conclusion is that, while we must await for further data, particularly from the French state and also from Southern Germany, the combination of this new data with that of Myres 2010 only ratifies me in my previous conclusions, which are:
I put these notions on a map. It must be considered a rough sketch, a working hypothesis, because there is not enough data to be reasonably certain about all the details: 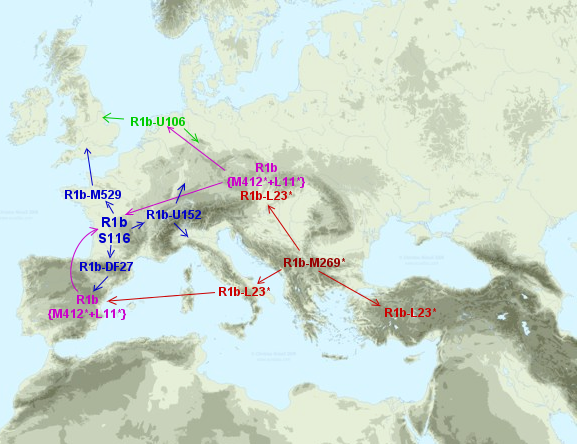 I would not dare to give tempos here. The sketched pattern of expansion can be equally consistent with a Neolithic or a Paleolithic modeling. The important pivotal role of France and the Netherlands could weight in favor of a Paleolithic model but it is true that aDNA and certain prehistoric reconstructions could allow for the French role (at least) to fit within an Atlantic Neolithic (Megalithism + Bell Beaker) theory for the expansion of S116 and I see no reason why the Netherlands could not have also played a similar role in NW Europe.

Thanks to Jean and Mike for the heads up.

Must read: demolishing (and well deserved) criticism of Balarasque 2010 and to some extent also of Myres 2010. They totally dismiss STR-based age estimates as wrong, misleading.

The anciente Guanche mummies' Y-DNA pool includes 10% R1b-M269. Considering that the islands were colonized c. 1000 BCE, I can only imagine that the Steppe Horde will find some way to blame the forgotten squire of Herakles for that. Or something...

Thanks to Georg for mentioning: that's the kind of feedback I love.