Alentoft 2015: more ancient DNA from beyond the Rhine

I've got some "friendly spam" insisting that I write something on this paper:

On the positive side, I think the study is much better quality than Haak's, with much more extensive and good quality supplementary materials, many of which are interesting. On the negative side, it totally lacks of any Western European samples, excepted the already known Epipaleolithic ones, being therefore pretty much useless to the understanding of the formation of the modern European genetic pool, except in a negative sense (stuff that is still clearly missing with the Central and Eastern references we have).

This huge blank in Western Europe, who nobody seems willing to fill up, would be quite apparent in the locator map except that it is poorly dissimulated by cutting a good chunk of Europe out of it:


What do we get in this paper then? Lots of info about Central Europe, notably the Carpatho-Danubian region, also about the Greater Caucasus, Siberia and historical Denmark. Add to that a couple of novel sequences from Bronze Age Montenegro and one from Estonia.

It's interesting in its own way but I'm still demanding Western European ancient DNA. In fact this study (piling up with others) clearly evidences that the Western European, particularly Atlantic aDNA must be key to the understanding of the formation of European peoples. For example: 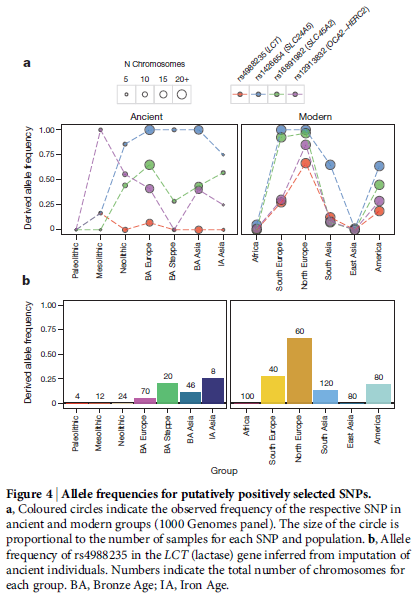 Something is amiss, right? Well, that is the LCT allele. Bell Beaker Blogger spotted it very well but he could not explain it. So I told him: There are no samples from Western Europe. That's why!

Actually Chalcolithic Basques from the Ebro banks already had more rs4988235-T than any of the samples shown here: 27% overall with as much as 31% in San Juan Ante Porta Latinam.

Notice anyhow that T allele frequency is not equal to "lactase persistance" because, on this allele alone, it may be distributed unequally through individuals (and that's precisely what we see in the Chalcolithic Basque samples, suggesting two different populations). Also there may be other alleles producing the same effect, just that they are not that famous or even known at all.

I must say that the recent finding of similar mtDNA pools to those found in ancient Basques and resembling modern ones in the Seine basin, does reinforce the notion of Western Europe being key, not just for this allele but in general for the conformation of modern genetic pools in much of Europe.

It would seem (Mälstrom 2007) that the Gokhem people (Megalithic SW Swedes) also had some notable LCT frequencies, which are missing everywhere else (in Central-East and Mediterranean Europe, that is) before modernity. Hence the European LCT allele must have expanded from the Atlantic.

It's not the only this particular trait, mind you. For example, another detail that Bell Beaker Blogger spotted in this paper's data, is that the first known modern S116-derived is in a Bell Beaker individual. Not in Yamnaya, not in Corded Ware, not in Unetice... but in the Bell Beaker carriers that (culturally at least) came from the Southwest.

Specifically it is R1b-U152 (alias S28), which has sometimes been dubbed the "Celtic" subclade because of its distribution across the Alps, being particularly important in Switzerland and North Italy (including non-Celtic regions like Tuscany, Piamonte and Liguria, as well as Corsica). It has also some notable presence in much of France, SW Germany and Belgium.

I already argued back in 2010 that R1b-S116 must have expanded from Southwestern Europe, possibly Southern France. No need to extend myself on this matter because there has been nothing new in all these five years (sadly enough). Just attach some old maps here for your convenience:

Hidden deep in the supplemental materials there is sup. fig. 6, which is an ADMIXTURE analysis of ancient and modern sequences. I simplified it by removing modern Asian and African samples as well as low K scores, all them pretty much irrelevant, adding more clear labels and rotating it: 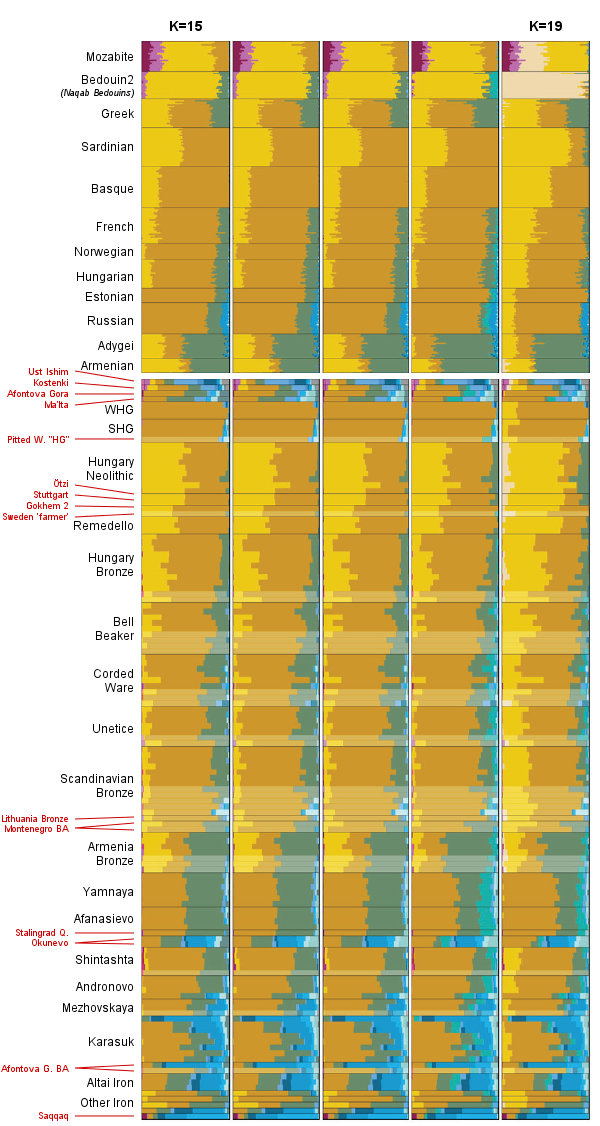 The most interesting aspect is that this analysis pretty much gets rid of the exaggerated Yamna influence attributed by Haak, bringing it down to much more acceptable levels. Even Corded Ware peoples were, it seems now, only weakly related to Yamnaya and much more strongly related to Paleo-European hunter-gatherers (tan) and Mediterranean early farmers (yellow). Some of the Caucasus (teal) component was anyhow already present in pre-Indoeuropean farmers from Hungary and it is only the minor Siberian element (blue shades) what really marks the distinctiveness of Indoeuropeans.

Notice that in this analysis, early European farmers like Stuttgart are not single color but dual: they appear as almost exactly a 50-50 mixture of Paleo-Europeans (tan) and Mediterranean farmers (yellow). The only (almost) true yellow reference are Naqab Bedouins, pointing again to a PPNA origin of the migrant farmers, who, after admixture with European aborigines, surely in Thessaly, spread the Neolithic through the subcontinent.

When, at K=19, the Naqab Bedouins form their own distinctive component (pale yellow) the yellow component suddenly expands in all other samples at the expense of the rest. It changes meaning at that point, beware: it has become the Sardinian component, although one can well argue that this component is very much dominant among early European farmers (but always mixed with some Paleo-European, some Caucasus, some Bedouin even), there is not any single sample that is clearly dominated by it at >80% frequencies (visual estimate), only Sardinians score that high. Admittedly it'd be interesting to re-run this without Sardinians and see what happens.

From the Basque origins viewpoint, I find notable that (again) the Basque and Swedish farmer sequences are similar all along. The latter have more yellow component however, implying that Basques are even more Paleo-European than they were.

In contrast, in extended data fig. 6, Basques appear as less related to WHG than our immediate neighbors (Spanish and French), what is probably an artifact of Indo-European admixture in the latter, as Indoeuropeans were no doubt largely Paleo-European and the Siberian elements they carried may also weight in that same direction. This is also visible in the ADMIXTURE graph above: French clearly carry some more tan Paleo-European, in addition to the Caucasian teal (and in some K-values also minor Siberian blue shades).

In general we see an apparent increase of the Paleo-European component as we move away from the Neolithic but while in the French case this can be partly attributed to Indoeuropean flows from, ultimately, Eastern Europe, in the Basque case that is not the case. There must be another source of that excess Paleo-European element and that source must necessarily in Atlantic Europe.

Time to do proper research, time to sample the ancient Far West.
Posted by Maju at Tuesday, June 16, 2015