Update (Dec 25): much of the Northeastern aDNA is also discussed in an English language study (h/t Kristiina):

Combining the data from both sources, I produced the following maps: 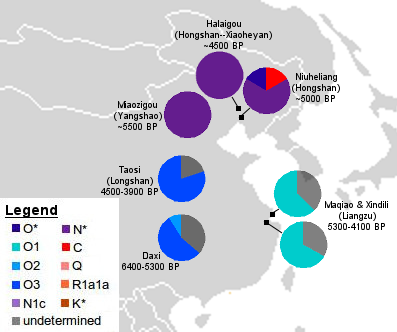 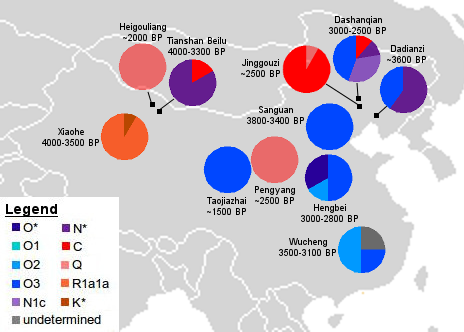 I find particularly interesting the first map because it outlines what seem to be three distinct ethnic (or at the very least genetic) regions in the Neolithic period:
Later on, in the Metal Ages, a colonization of the North/NE by these O3 peoples seems apparent, followed, probably at a later time, by a colonization of the West (Taojiazhai).

We do not have so ancient data for the West but we can still see a diversity of lineages, notably Q (largely Q1, if not all), C (most likely C3, also in the NE) and N (also in the NE). While the arrival of O3 to this area was probably late, the arrival of R1a1a is quite old, however it is still almost certainly related to the first Indoeuropean migrations eastwards, which founded the Afanasevo culture in the area of Altai.

I find also very interesting the presence, with local dominance often, of N (including an instance of N1c) and Q in the Northern parts of P.R. China, because these lineages are now rather uncommon but are still dominant in Northern Asia, Northeastern Europe and Native America. The fact that they were still so important in the Northern Chinese frontier in the Neolithic and even in the Metal Ages should tell us something about their respective histories and, in the case of N, origins as well.

It is also notable that no D was detected anywhere. However the regions with greatest D frequencies like Tibet, Yunnan or Japan were not studied.