There is a rather interesting paper still in preparation available online and causing some debate.

Analysis of ancient DNA can reveal historical events that are difficult to discern through study of present-day individuals. To investigate European population history around the time of the agricultural transition, we sequenced complete genomes from a ~7,500 year old early farmer from the Linearbandkeramik (LBK) culture from Stuttgart in Germany and an ~8,000 year old hunter-gatherer from the Loschbour rock shelter in Luxembourg. We also generated data from seven ~8,000 year old hunter-gatherers from Motala in Sweden. We compared these genomes and published ancient DNA to new data from 2,196 samples from 185 diverse populations to show that at least three ancestral groups contributed to present-day Europeans. The first are Ancient North Eurasians (ANE), who are more closely related to Upper Paleolithic Siberians than to any present-day population. The second are West European Hunter-Gatherers (WHG), related to the Loschbour individual, who contributed to all Europeans but not to Near Easterners. The third are Early European Farmers (EEF), related to the Stuttgart individual, who were mainly of Near Eastern origin but also harbored WHG-related ancestry. We model the deep relationships of these populations and show that about ~44% of the ancestry of EEF derived from a basal Eurasian lineage that split prior to the separation of other non-Africans.

The new European hunter-gatherer samples carried all Y-DNA I and mtDNA U5a and U2e.

The Y-DNA lineages are:
These are with certainty the oldest Y-DNA sequences of Europe so far and the fact that all them fall within haplogroup I(xI1) supports the notion of this lineage being once common in the subcontinent, at least in some areas. Today I2 is most common in Sardinia, the NW Balcans (Croatia, Bosnia, Montenegro), North Germany and areas around Moldavia.

I2a1b (which may well be all them) is currently found (often in large frequencies) in the Balcans and Eastern Europe with some presence also in the eastern areas of Central Europe. It's relative I2a1a is most common in Sardinia with some presence in SW Europe, especially around the Pyrenees. I2a1 (probably I2a1a but not tested for the relevant SNPs) was also found, together with G2a, in a Chalcolithic population of the Treilles group (Languedoc) and seems to be somehow associated to Cardium Pottery Neolithic.

If you want my opinion, I'd think that I2a before Neolithic was dominant, like mtDNA U5 (and satellites U4 and U2e), in much of Central and Eastern Europe but probably not in SW Europe, where mtDNA U5 seems not so much hyper-dominant either, being instead quite secondary to haplogroup H (at least in Western Iberia). But we'll have to wait until geneticists manage to sequence Y-DNA in several SW European Paleolithic remains to be sure.

Most of the study (incl. the must-read supplemental materials) deals however with the autosomal DNA of these and other hunter-gatherers, as well as of some Neolithic farmers from Central Europe and Italy (Ötzi) and their comparison with modern Europeans.

To begin with, they generated a PCA plot of West Eurasians (with way too many pointless Bedouins and Jews, it must be said) and projected the ancient Europeans, as well as a whole bunch of Circum-Pacific peoples on it: 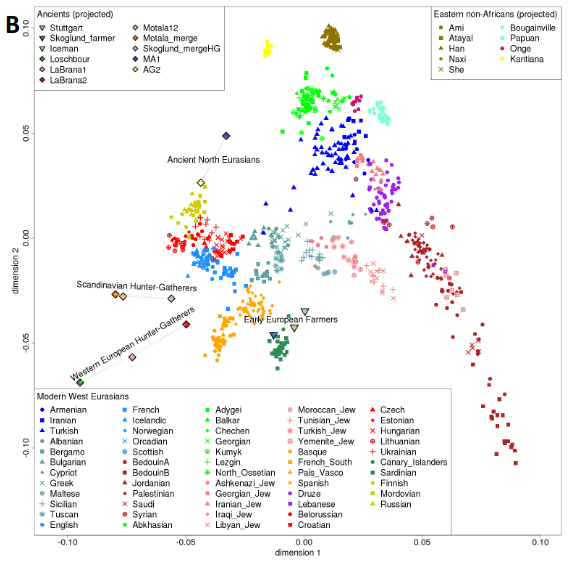 The result is a bit weird because, as you can see, the East Asians, Native Americans and Melanesians appear to fall way too close to the peoples of the Caucasus and Anatolia. This seems to be a distorting effect of the "projection" method, which forces the projected samples to align relative to a set of already defined parameters, in this case the West Eurasian (modern) PCA.

So the projection basically formulates the question: if East Asians, etc. must be forcibly to be defined in West Eurasian (WEA) terms, what would they be? And then answers it as follows: Caucasian/Anatolian/Iranian peoples more or less (whatever the hidden reasons, which are not too clear).

Similarly, it is possible (but uncertain) that the ancient European and Siberian sequences show some of this kind of distortion. However I have found experimentally that the PCA's dimension 1 (but not the dimension 2, which corresponds largely to the Asian-specific distinctions) still correlates quite well with the results of other formal tests that the authors develop in the study and is therefore a valuable tool for visualization.

But this later. By the moment the PCA is asking and answering three or four questions by projecting ancient European and Siberian samples in the West Eurasian plot:

Whatever the case, there seems to be quite a bit of autosomal diversity among ancient Western hunter-gatherers, at the very least when compared with modern peoples. This makes some good sense because Europe was a big place already in Paleolithic times and must have harbored some notable diversity. Diversity that we may well find to grasp if we only sample people from the same areas once and again.

On the other hand, they seem to cluster in the same extreme periphery of the European cluster, opposed to the position of West Asians, and therefore suggesting that there has been some West Asian genetic flow into Europe since then (something we all assume, of course).


I tried to figure out how these formal tests are reflected, if at all in the PCA, mostly because the PCA is a much easier tool for comprehension, being so visual. Eventually I found that the dimension 1 (horizontal axis) is very close to the genetic distances measured by the formal tests (excepted those for the ANE component, obviously), allowing a visualization of some of the possible problems caused by their use of Lochsbour as only reference, without any control. Let's see it:

While not exactly, the slashed vertical magenta line (median in the dimension 1 between Lochsbour and Stuttgart) approximates quite well the WHG vs EEF values measured in the formal tests. Similarly, the slashed green axis (median in PC1 between Lochsbour and an good looking Bedouin) approximates to a great extent the less precise results of the formal tests the authors applied to guesstimate the West Asian and WHG ancestry of EEFs, which ranged between 60% and almost 100% West Asian (my line is much closer to the 60% value, which seems more reasonable).

When I tried to find an alternative median WHG/West Asian line, using Braña 2 and the first non-Euro-drifted Turk I could spot (Anatolia is much more likely to be the direct source of West Asian ancestry in Europe than Bedouins), I got exactly the same result, so no need to plot any second option (two wrongs sometimes do make one right, it seems). But when I did the same with La Braña 2 and Stuttgart I got a genuine good-looking alternative median line, which is the slash-and-dot magenta axis.

This alternative line is probably a much more reasonable 50% WHG-EEF approximation in fact and goes right through Spain, what makes good sense for all I know.

Of course the ideal solution would be that someone performed good formal tests, similar to those done in the study, with Braña 2 and/or Skoglund, which should be more similar to the actual WHG ancestry of modern Europeans than the extremely divergent Lochsbour sequence. An obvious problem is that La Braña produced only very poor sequences but, well, use Skoglund instead or sample some Franco-Cantabrian or Iberian other Paleolithic remains.

Whatever the solution, I think that we do have a problem with the use of Lochsbour as only WHG proxy and that it demands some counter-testing.

What about the ANE component? I do not dare to give any alternative opinion because I lack tools to counter-analyze it. What seems clear is that its influence on modern Europeans seems almost uniformly weak and that it can be ignored for the biggest part. As happens with the WHG, it's quite possible that the ANE would be enhanced if the sequence from Afontova Gora is used instead of that of Mal'ta but I can't foresee how much.

Finally some speculative food-for-thought. Again using the visual tool of the PCA, I spotted some curiosities:

Most notably it is apparent that the two WHG populations (Western and Scandinavian) are aligned in natural axes, which seem to act as clusters. Extending both (dotted lines) they converge at a point closest to some French, notably the only "French" that tends towards "Southern France" and Basques. So I wonder: is it possible that these two WHG cluster-lines represent derived ancient branches from an original population of SW France. We know that since the LGM, the area of Dordogne (Perigord) was like the megapolis of Paleolithic Europe, with population densities that must have been several times those of other areas. We know that this region was at the origin of both Solutrean and Magdalenian cultures and probably still played an important role in the Epipaleolithic period.

So I do wonder: is that "knot" a mere artifact of a mediocre representation or is it something much more real? Only with due research in the Franco-Cantabrian region we will find out.
Posted by Maju at Thursday, December 26, 2013