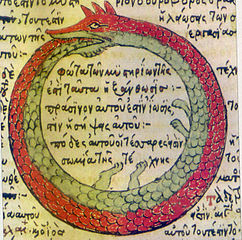 Last year Stephen Oppenheimer published yet another article on the mitochondrial DNA tree and his vision of the molecular clock applied to the human matrilineages.

The centerpiece of the article is fig.2, a mtDNA tree with his "molecular clock" estimates of the ages of the haplogroups. Sadly it has a major problem: the resulting dates have a horrible fit with all the archaeological and paleoclimatic evidence and even with the most recent estimates for the Pan-Homo split.

Much of the article (all section 1.b) is dedicated to attempt to justify his so-called "calibration" methods, which are in the end based on a self-reference: Soares 2009, of which Oppenheimer was co-author and which was calibrated assuming a Pan-Homo split age of 5-6 Ma.

All these Pan-Homo split age guesstimates are horribly wrong, because Sahelanthropus tchadiensis (c. 7 Ma ago) was already in the Homo line (and not anymore in the Pan one) and also because several other authors have estimated the Pan-Homo divergence age to be at least 8 Ma old, and maybe as ancient as 13 Ma (Langergraeber 2012).

Sadly the Academy remains stuck and Oppenheimer is no exception but rather the opposite. This is his fig. 2 with my rough corrections in red after proper recalibration of the Pan-Homo split age: 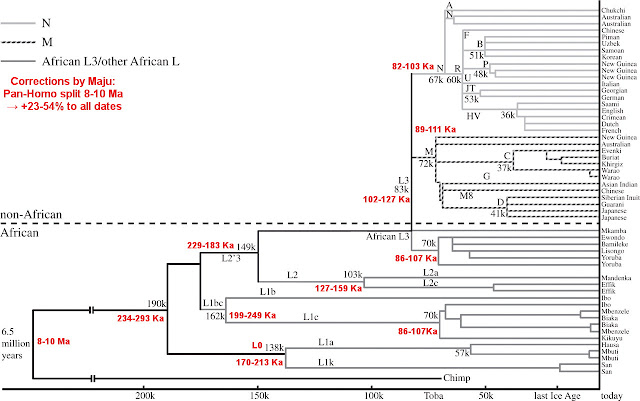 This does not mean that the red colored dates provided here are necessarily the correct ones, although in many cases they do seem to fit much better with the archaeological and paleoclimatic data, especially at the lower ranges. It is merely a simple "first aid" correction to Oppenheimer's necessarily incorrect estimates.

Other factors must be taken into account, for example I do not believe for a second that M is older than African L3 branches, which show only one or, in one case, two coding region mutations downstream of the L3 node, while M is three mutations downstream and N five. Oppenheimer seems determined to count HVS mutations for example and to estimate age counting from the present forms (which could well be frozen in time for many many millennia because of "drift out" phenomena if the population was large enough but not too large, which would tend to freeze the hegemonic lineages in my modeling tests, while removing any novel ones).

I'm just stating the obvious: what Oppenheimer is selling is necessarily wrong.
Posted by Maju at Friday, May 17, 2013