The human colonization of Australia and Near Melanesia

Continuing with the joint series of articles on the expansion of Homo sapiens, David Sánchez published last week an interesting piece[es] on the original colonization of Australia and Papua at Noticias de Prehistoria - Prehistoria al Día, which I'll try to synthesize here.


Maybe the most interesting detail is that Lake Mungo 3 has dates that clearly establish a colonization of the continent at least 60,000 years ago:

The sites of Nauwalbila I and Malakunanja II have provided similar dates: 60-50 Ka BP (OSL) and 61,000 BP +9,000/-13,000 (TL) respectively. So we can safely discard the conservative approach that only allowed for at most 50 Ka as earliest colonization boundary for the Oceanian continental landmass.

The depiction of a Genyornis, giant duck-like bird extinct before 40 Ka, in Australian rock art ago also supports a very early date for the settlement of Australia. In Highland Papua human presence is also confirmed to at least 49 Ka ago, as I reported in 2010.

Naturally the settlers must have arrived by sea, the most commonly accepted candidate for such a vessel is a humble raft still used by some Papuan populations and which has parallels in Southern Asia (also still in use in some places): 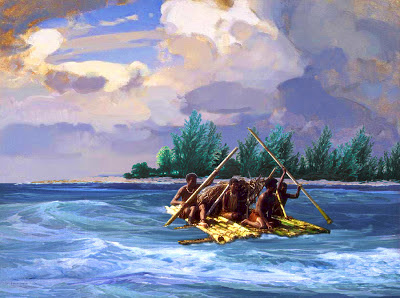 Such a journey was attempted with a similar but larger raft, equipped with a simple sail named Nale Tasih 2. This craft had no trouble in reaching the continental platform of Australia from Timor in just six days and they actually managed to reach the modern Australian coast, although they desisted of beaching by night in the middle of a storm in an area infested by the largest crocodiles on Earth, being evacuated by the coastguard instead (the barge was later recovered in perfect state).
Posted by Maju at Friday, May 17, 2013