The first advanced Bronze Age civilization of Europe was established by the Minoans about 5,000 years before present. Since Sir Arthur Evans exposed the Minoan civic centre of Knossos, archaeologists have speculated on the origin of the founders of the civilization. Evans proposed a North African origin; Cycladic, Balkan, Anatolian and Middle Eastern origins have also been proposed. Here we address the question of the origin of the Minoans by analysing mitochondrial DNA from Minoan osseous remains from a cave ossuary in the Lassithi plateau of Crete dated 4,400–3,700 years before present. Shared haplotypes, principal component and pairwise distance analyses refute the Evans North African hypothesis. Minoans show the strongest relationships with Neolithic and modern European populations and with the modern inhabitants of the Lassithi plateau. Our data are compatible with the hypothesis of an autochthonous development of the Minoan civilization by the descendants of the Neolithic settlers of the island.

From the paper (emphasis mine):

Among modern populations the best fits seem to be the Balcans, Turkey and Middle East, both with five non-singleton matches out of six possible ones (ht 20 is only found in Turkey, click to expand if you don't see it, while ht 8 is found in the Balcans and the Middle East).

So I would conclude that the Minoan sample fits well with a mix of Anatolian and Balcanic (or less likely Near Eastern) origin, after due founder effect, fitting also reasonably well with Danubian Neolithic and therefore with their likely (partial?) origins at the Balcanic Painted Ware Neolithic.

The greater pseudo-affinity with other populations, based only on overall frequency, seems to be inflated by four haplotypes only: ht 14 (the omnipresent CRS), ht 11 (apparently a common K variant), ht 4 (a relatively common T variant but only present in a single Minoan individual) and ht 12 (H5, again present only in an isolated case in the Minoan sample).

So let's please be careful and try not to mix quantity (frequency) with quality (relevant haplotype matches).

The paper also includes a principal component analysis with a more detailed array of populations: 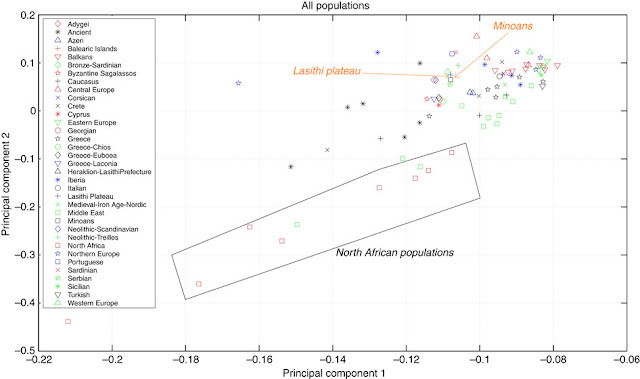 One of the most intriguing facts here is the near-identity between Minoan and modern Lasithi Plateau populations. It would seem logical but Wikipedia describes an instance of ethnic cleansing and later repopulation by the Venetians (emphasis mine):

The fertile soil of the plateau, due to alluvial run-off from melting snow, has attracted inhabitants since Neolithic times (6000 BC). Minoans and Dorians followed and the plateau has been continuously inhabited since then, except a period that started in 1293 and lasted for over two centuries during the Venetian occupation of Crete. During that time and due to frequent rebellions and strong resistance, villages were demolished, cultivation prohibited, and natives were forced to leave and forbidden to return under a penalty of death. A Venetian manuscript of the thirteenth century describes the troublesome plateau of Lasithi as spina nel cuore (di Venezia) - a thorn in the heart of Venice. Later, in the early 15th century, Venetian rulers allowed refugees from the Greek mainland (eastern Peloponnese) to settle in the plain and cultivate the land again.

Is this totally wrong? A brutal error? Erudite vandalism? I cannot say (and would appreciate knowledgeable feedback).

A clear issue is that the current inhabitants of the plateau have a distinctive genetic signature in their Y-DNA, quite different from that of other Cretans, with much higher frequencies of R1b and R1a and much much lower frequencies of the most common Cretan lineage: J2a1. However they also almost lack the main mainland Greek haplogroup E1b, what suggests that the recolonization from Peloponnese story is not correct either.

Interestingly Cretan R1b, so important in Lasithi Plateau (almost 50%), is also largely derived from Western Europe (although the other half could be Balcanic), maybe via Italy, and cannot be ancestral to it (almost all the Western variant belongs to a derived subclade common in Italy, Central Europe and France: U152).

What is going on here then? I must admit that I do not really know.

Other very close populations in the PCA graph are Serbians (green star) and Bronze Age Sardinians (green rhombus). Take it as you wish. Bronze Age Sardinians are also top in the pairwise comparison table (the closest modern populations being Portuguese, Germans and Corsicans, also Neolithic Scandinavians). However these statistical analyses (both the PCA and the pairwise table) may well hide flaws (like the above mentioned confusion between quantity and quality), so I'd take them with the proverbial pinch of salt, as the confidence of the findings depends on the details of the methodology, not necessarily the best ones.

In any case, the general conclusions of the paper do not seem to be wrong: the Egyptian origin hypothesis is totally discarded and a Neolithic origin seems much more likely. However so many questions remain open...