Dienekes' Anthropology Blog mentions this week several papers that dwell in the nature of the Nordic Bronze Age, specifically in Southern Sweden. It turns out that the copper used by the Nordic smiths was not local in almost all cases but imported from elsewhere in Europe (Sardinia, Iberia, Auvergne, Tyrol and British Islands) or even West Asia (Cyprus). This imported copper was exchanged by essentially amber, it seems, an export product of the Nordic area since the Chalcolithic. Nothing is said about the tin needed to make bronze but most likely it came from SW Britain and/or NW Iberia, as these were the two main producers of the strategic metal in old times.

Of the three mentioned papers only one is freely accessible, and also quite interesting to read:

The Bronze Age of Scandinavia (1750-500 BC) is characterized by the sudden appearance of bronze objects in Scandinavia, the sudden mass appearance of amber in Mycenaean graves, and the beginning of bedrock carvings of huge ships. We take this to indicate that people from the east Mediterranean arrived to Sweden on big ships over the Atlantic, carrying bronze objects from the south, which they traded for amber occurring in SE Sweden in the Ravlunda-Vitemölla–Kivik area. Those visitors left strong cultural imprints as recorded by pictures and objects found in SE Sweden. This seems to indicate that the visits had grown to the establishment of a trading centre. The Bronze Age of Österlen (the SE part of Sweden) is also characterized by a strong Sun cult recorded by stone monuments built to record the annual motions of the Sun, and rock carvings that exhibit strict alignments to the annual motions of the Sun. Ales Stones, dated at about 800 BC, is a remarkable monument in the form of a 67 m long stone-ship. It records the four main solar turning points of the year, the 12 months of the year, each month covering 30 days, except for month 7 which had 35 days (making a full year of 365 days), and the time of the day at 16 points representing 1.5 hour. Ales Stones are built after the same basic geometry as Stonehenge in England.

The other two are sold under mercantile schemes:

I.B. Gubanov, Grave Circle B at Mycenae in the Context of Links Between the Eastern Mediterranean and Scandinavia in the Bronze Age. Archaeology, Ethnology and Anthropology of Eurasia 2012. Pay per view → LINK [doi:10.1016/j.aeae.2012.08.011]

Ling's paper is the one indicating that Swedish copper had exotic Atlantic and Mediterranean origins, while Gubanov's highlights that amber from the Baltic is found in one Mycenaean grave (specifically Grave Circle B) and not in any known Minoan (Eteocretan) one. For him this means that bronze metallurgy and other associated elements like the quadruple spiral motif arrived with Mycenaean sailors in the Bronze Age.

Grave Circle B is actually older than the much more famous Grave Circle A (the pseudo "Agamenon's Tomb"), although both belong to the Late Helladic I period (c. 1550-1500 BCE).


This chronology is interesting because it was roughly in those dates when SE Iberian El Argar civilization began its phase B, characterized by Greek influence in burials (pithoi). It is worth mentioning here that while these are the first findings of amber from Nordic Europe in the Eastern Mediterranean, such jewels were common in Iberia since c. 3000 BCE (beginnings of Chalcolithic period).

It would seem therefore clear that Iberia was a pivotal area in this purported Scandinavian-Greek exchange. The question is: did the early Greek sailors actually reached Scandinavia themselves or were they rather just receiving products by mediation of Iberian traders with a long tradition of Atlantic (and Mediterranean) navigation?

It is probably a hard to answer question. But the studies point to some relevant cues, like the Swedish drawings of ships with rams and the presence of the (originally Mediterranean?) motif of the quadruple spiral, so similar to the Basque lauburu (four heads) icon (probably related to both the svastika and triskel). 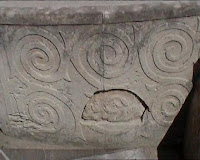 This spiral icon is not Mycenaean in origin, having been found in Minoan Crete and Megalithic Malta (right), which are respectively older and a lot older than the Mycenaeans. The motif is not even exclusive of Europe, with very similar concepts found for example in the pottery of Western Mexico.

So while the similitude is striking, this evidence is not conclusive on its own.

The Cypriot copper evidence alone is not enough evidence of Mycenaean presence in Scandinavia, very especially as Cyprus seems important, long before the Mycenaeans in the East-West Mediterranean connections. Cyprus used their own script (probably used for the native Eteocypriot language) up to the 4th century BCE and while Mycenaean presence in the island seems attested in the very late Bronze Age, the island was not a Mycenaean center at all but rather was under Hittite and Ugaritic influence instead.

So we are left with the claim of rammed ships being coincident with the Mycenaean period. However what I find searching around are dates of c. 1700 BCE (Norway), very early in the Mycenaean chronology and some two centuries older than the single amber finding in Mycenae. It could indeed be a Mycenaean influence but how conclusive is it?

I have a vague memory of a Mycenaean ship (?) found years ago in the waters of Denmark or Germany, however I can't find anything searching online. Does anyone know something more detailed on the matter? This would be key evidence but I cannot trust my memory alone.

So there seems to be some sort of interaction between the Eastern Mediterranean and Scandinavia but, as far as I can tell, specifically Mycenaean presence in the Far North is circumstantial rather than conclusive.

Besides the issue of purported trade with the Mediterranean, there are some other interesting elements in Mörner & Lind 2013, notably the description of the Ales Stones ship-shaped megalith ("sun ship") as an astronomical calendar: 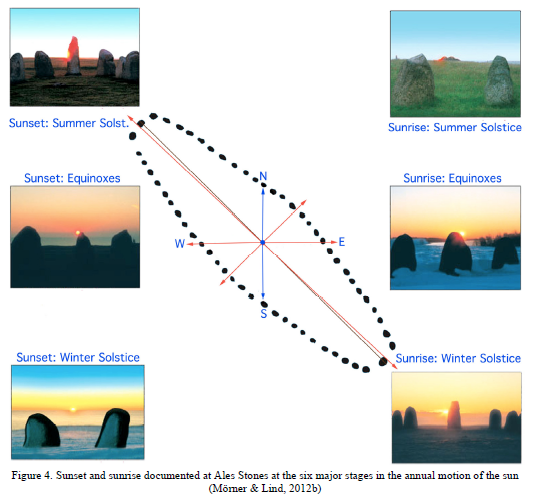 Not sure how new this is but it is a very interesting thing to know, right?

Update (May 17): Dispatches from Turtle Island has some interesting and realistic calculations on how long would take an ancient ship to sail from Greece to Sweden and back (c. 112 days, he estimates).
Posted by Maju at Sunday, May 12, 2013