New ancient mtDNA from an underwater cave in Yucatan confirmed that there are no obvious differences between the so-called Paleoamericans and modern Native Americans.

Because of differences in craniofacial morphology and dentition between the earliest American skeletons and modern Native Americans, separate origins have been postulated for them, despite genetic evidence to the contrary. We describe a near-complete human skeleton with an intact cranium and preserved DNA found with extinct fauna in a submerged cave on Mexico’s Yucatan Peninsula. This skeleton dates to between 13,000 and 12,000 calendar years ago and has Paleoamerican craniofacial characteristics and a Beringian-derived mitochondrial DNA (mtDNA) haplogroup (D1). Thus, the differences between Paleoamericans and Native Americans probably resulted from in situ evolution rather than separate ancestry. 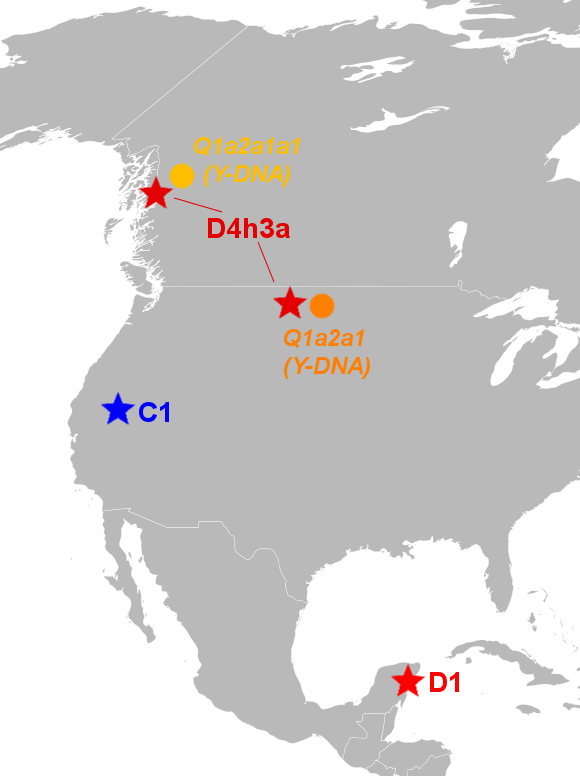 The Hoyo Negro girl, whose skeleton was preserved underwater for millennia, after she apparently fell into the cave and died as consequence, belonged to haplogroup D1, one of a handful found in modern Native Americans (all them within A, B, C, D and X2).

The radiocarbon date for the skeleton is c. 12,800 BP, while the upper limit of her death (inferred from calcite formation on the bones, dated via thermoluminiscence) is of c. 12,000 BP.

Overall there are already four mtDNA and two Y-DNA Paleoamerican sequences from the 13-10,000 BP bracket, all of which fit perfectly with modern Native American DNA. See map to the right.

This underlines that anthropometric estimates are not really reliable to determine ancestry, at least in the long run, because there has been much speculation about these not supporting continuity between the first settlers of America (Paleoamericans) and modern Native Americans, however ancient DNA consistently supports continuity.

One thing is the genotype and another the phenotype. And although they are somehow related for the greatest part, this relationship is not always straightforward, at least with our current knowledge.