Michael points me to this very interesting compilation of articles freely available to read online (or to purchase as PDF for a small amount, or even as true book) dealing with the complexities of the Bell Beaker phenomenon in Europe. The articles are mostly in English and French, although there is also one in German.

It would be quite worthless that I would try to make any synthesis of such an extensive and plural work on such a complex and hotly debated topic. But I must say that I find most interesting the attempts to describe the regional differences of this phenomenon and very especially the fact that, West of the Rhine and North Sea and South of the Alps, the phenomenon is always found inside previously existing cultural contexts, often as minority element. Therefore the pre-existing division between collective burials' Europe (Megalithic mostly) and single burials' one (Kurgans in essence) stands for most of the timeline and geographic extent of this cultural phenomenon, which no doubt highlights the increased European interactivity of the Late Chalcolithic.

Hence it is important to establish the regional structure (not strict but notable anyhow) of the Bell Beaker phenomenon and that is indeed addressed by several of the articles. For example, Marc M. Vander Linen proposes the following five regions: 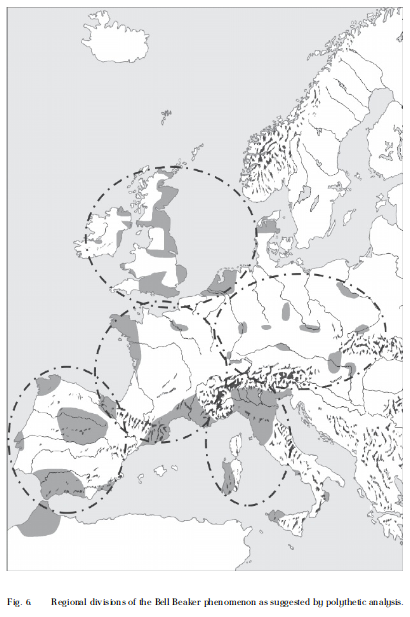 Of these only the Eastern region is single burial senso stricto, all the rest retaining their ancestral practices, which were collective burial in most cases (although this changes gradually in some areas as time passes until the "funerary collectivism" eventually vanishes as the Bronze Age hits in).

In this map by Marie Besse of the so-called "common ware" (no or very little decorated beakers and similar pots, specific of continental Europe) we can also see much of the collective/single burial dichotomy. 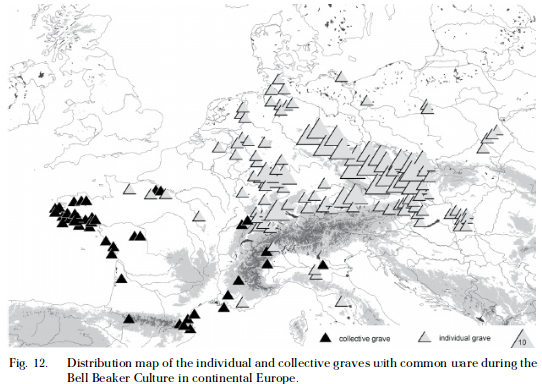 Anyhow, notice that, with limited exceptions, bell beakers are not dominant in most regions and that most burials lack them. One of the main exceptions is Portuguese Estremadura, where beakers are found almost in every burial. However in nearby Alentejo, more rural and much less cosmopolitan, the opposite is true.