Spanish archaeological blog Asociación los Dólmenes reports today[es] that a curious and somewhat obscene finding is at the roots of the modern city of Seville (known as Hispalis in Roman times). The finding of a phallic relief on the entrance of one of the oldest buildings of that city, at the port, has open a debate on whether the city has its origins in whore house (as could be normal for a harbor) or are we talking instead of a building-protector deity apparently of North African origins (where is found in many public buildings). 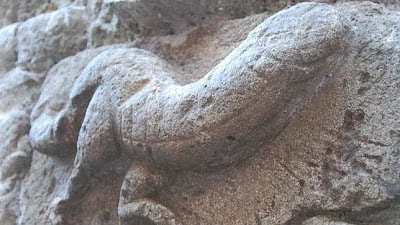 But regardless of the exact meaning of the icon, the depiction of an erect virile member with avian legs made me think of the origin of colloquial Spanish and English words for penis: cock and polla (Sp. chicken, fem.) Obviously Romans were not thinking of T. rex, right?

What about other languages? Berber, Portuguese, Catalan-Occitan, French, Italian?

PS: The image actually has a lizard-like tail what should get us all a bit perplex because the closest thing that comes to mind is a dinosaur but Romans could not know anything about dinos, could they?

This is the kind of argument used to reject the authenticity of some archeological findings like in the Iruña-Veleia case, where conjectures about the plausibility or not of this or that text (the non-existent Descartes - is Miscart) or letter (Z for example) have been used as alleged proof of falsification.

Whatever the deep logic behind this icon, it's not weirder than gargoyles or centaurs, is it?
Posted by Maju at Tuesday, November 27, 2012