The spears of Homo rhodesiensis

When I saw this image: 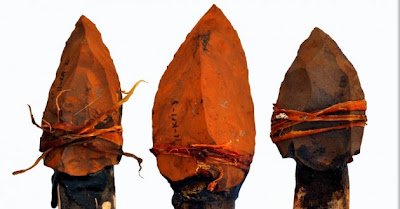 ... I immediately discarded the news item. I said to myself: if those Canadian researchers can't reproduce a proper way to haft a Paleolithic spear, how can they know anything on the matter? Also I only occasionally comment on pre-Sapiens species and the paper is pay-per-view... so I had all the excuses not to comment.

But in the end the report may be relevant even if the hafting techniques illustrated in that image are so totally wrong that it makes me angry (you don't tie a knife's edge, the points seem to be actually shaped so the wood goes around the base...)

Hafting stone points to spears was an important advance in weaponry for early humans. Multiple lines of evidence indicate that ~500,000-year-old stone points from the archaeological site of Kathu Pan 1 (KP1), South Africa, functioned as spear tips. KP1 points exhibit fracture types diagnostic of impact. Modification near the base of some points is consistent with hafting. Experimental and metric data indicate that the points could function well as spear tips. Shape analysis demonstrates that the smaller retouched points are as symmetrical as larger retouched points, which fits expectations for spear tips. The distribution of edge damage is similar to that in an experimental sample of spear tips and is inconsistent with expectations for cutting or scraping tools. Thus, early humans were manufacturing hafted multicomponent tools ~200,000 years earlier than previously thought.


Raw examples of the points under discussion: 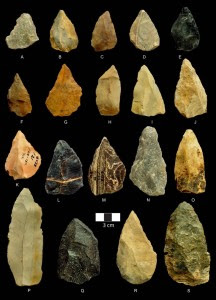 While these 500 millennia-old spears are not directly related to any hominin species, the general context almost necessarily implies that it must be Homo rhodesiensis, which is generally considered the immediate ancestor of Homo sapiens.

See for reference: Late human evolution maps (at my old blog Leherensuge), where I summarize the known paleoanthropology of the evolution of Homo spp. towards our kin and that of Neanderthals.

In synthesis: Homo rhodesiensis lived in Southern and Eastern Africa between c. 800,000 years ago (Saldanha Bay, South Africa) and the eve of our species c. 200,000 years ago (Omo, Ethiopia). Some of the late specimens (Lake Eyasi, Tanzania c. 240,000) are suspect of having transitional features towards us.