Anthropological and genetic news have been piling up in this strike journey. I'm not sure if I will be able to address all as they may deserve so I'm listing them here in very quick review.

My apologies because I meant that the "links" format would be over but if people overseas (and in some cases also in Europe) insist on working in the general strike journey and publishing things all around, all I can do is this (or risking not even doing anything at all).

Even if our genomes have diverged the microscopic environments we host in our guts are almost exactly the same, with three different types depending exclusively on diet.

Microbes inhabiting the human gastrointestinal tract tend to adopt one of three characteristic community structures, called ‘enterotypes’, each of which is overrepresented by a distinct set of bacterial genera. Here we report that the gut microbiotae of chimpanzees also assort into enterotypes and that these chimpanzee enterotypes are compositionally analogous to those of humans. Through the analysis of longitudinal samples, we show that the microbial signatures of the enterotypes are stable over time, but that individual hosts switch between enterotypes over periods longer than a year. These results support the hypothesis that enterotypic variation was present in populations of great apes before the divergence of humans and chimpanzees.

A more detailed review can be found at John Hawks' Weblog.

Research on Ethiopian genetic nuances with a Basque name as lead researcher:

Although hypoxia is a major stress on physiological processes, several human populations have survived for millennia at high altitudes, suggesting that they have adapted to hypoxic conditions. This hypothesis was recently corroborated by studies of Tibetan highlanders, which showed that polymorphisms in candidate genes show signatures of natural selection as well as well-replicated association signals for variation in hemoglobin levels. We extended genomic analysis to two Ethiopian ethnic groups: Amhara and Oromo. For each ethnic group, we sampled low and high altitude residents, thus allowing genetic and phenotypic comparisons across altitudes and across ethnic groups. Genome-wide SNP genotype data were collected in these samples by using Illumina arrays. We find that variants associated with hemoglobin variation among Tibetans or other variants at the same loci do not influence the trait in Ethiopians. However, in the Amhara, SNP rs10803083 is associated with hemoglobin levels at genome-wide levels of significance. No significant genotype association was observed for oxygen saturation levels in either ethnic group. Approaches based on allele frequency divergence did not detect outliers in candidate hypoxia genes, but the most differentiated variants between high- and lowlanders have a clear role in pathogen defense. Interestingly, a significant excess of allele frequency divergence was consistently detected for genes involved in cell cycle control, DNA damage and repair, thus pointing to new pathways for high altitude adaptations. Finally, a comparison of CpG methylation levels between high- and lowlanders found several significant signals at individual genes in the Oromo.

An extensive review can be found at Ethio Helix (where else?) 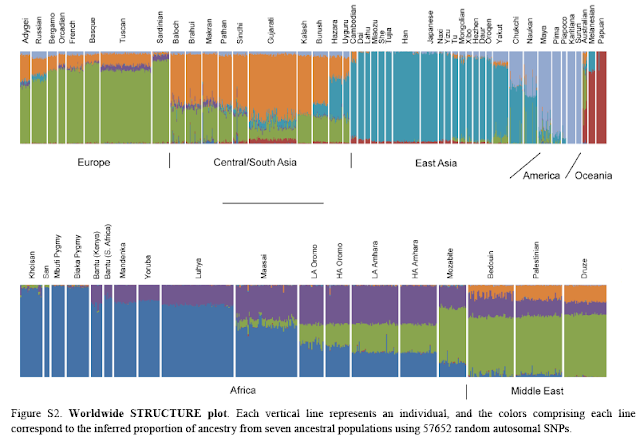 For 10,000 years pigs and humans have shared a close and complex relationship. From domestication to modern breeding practices, humans have shaped the genomes of domestic pigs. Here we present the assembly and analysis of the genome sequence of a female domestic Duroc pig (Sus scrofa) and a comparison with the genomes of wild and domestic pigs from Europe and Asia. Wild pigs emerged in South East Asia and subsequently spread across Eurasia. Our results reveal a deep phylogenetic split between European and Asian wild boars ~1 million years ago, and a selective sweep analysis indicates selection on genes involved in RNA processing and regulation. Genes associated with immune response and olfaction exhibit fast evolution. Pigs have the largest repertoire of functional olfactory receptor genes, reflecting the importance of smell in this scavenging animal. The pig genome sequence provides an important resource for further improvements of this important livestock species, and our identification of many putative disease-causing variants extends the potential of the pig as a biomedical model.

Interesting read on how competition can cause the formation of deep evolutionary valleys or gorges from which it is most difficult to exit and are therefore evolutionarily stable.

One strategy for winning a coevolutionary struggle is to evolve rapidly. Most of the literature on host-pathogen coevolution focuses on this phenomenon, and looks for consequent evidence of coevolutionary arms races. An alternative strategy, less often considered in the literature, is to deter rapid evolutionary change by the opponent. To study how this can be done, we construct an evolutionary game between a controller that must process information, and an adversary that can tamper with this information processing. In this game, a species can foil its antagonist by processing information in a way that is hard for the antagonist to manipulate. We show that the structure of the information processing system induces a fitness landscape on which the adversary population evolves. Complex processing logic can carve long, deep fitness valleys that slow adaptive evolution in the adversary population. We suggest that this type of defensive complexity on the part of the vertebrate adaptive immune system may be an important element of coevolutionary dynamics between pathogens and their vertebrate hosts. Furthermore, we cite evidence that the immune control logic is phylogenetically conserved in mammalian lineages. Thus our model of defensive complexity suggests a new hypothesis for the lower rates of evolution for immune control logic compared to other immune structures.

Genetics and psychology in relation to heroin use and abuse

Ting Li et al., Pathways to Age of Onset of Heroin Use: A Structural Model Approach Exploring the Relationship of the COMT Gene, Impulsivity and Childhood Trauma. PLoS ONE, 2012. Open access ··> LINK [doi:10.1371/journal.pone.0048735]

The interaction of the association of dopamine genes, impulsivity and childhood trauma with substance abuse remains unclear.

To clarify the impacts and the interactions of the Catechol -O-methyltransferase (COMT) gene, impulsivity and childhood trauma on the age of onset of heroin use among heroin dependent patients in China.

202 male and 248 female inpatients who meet DSM-IV criteria of heroin dependence were enrolled. Impulsivity and childhood trauma were measured using BIS-11 (Barratt Impulsiveness Scale-11) and ETISR-SF (Early Trauma Inventory Self Report-Short Form). The single nucleotide polymorphism (SNP) rs737866 on the COMT gene-which has previously been associated with heroin abuse, was genotyped using a DNA sequence detection system. Structural equations model was used to assess the interaction paths between these factors and the age of onset of heroin use.