On and around with Ötzi's genome

As you're probably more than aware by now there's a new paper on the market (yeah, 32 bucks - but worry not that I already got my hands on it) on the most loved mummy of Europe: Ötzi the Iceman.

A. Keller et al., New insights into the Tyrolean Iceman's origin and phenotype as inferred by whole-genome sequencing. Nature 2012. Pay per view. 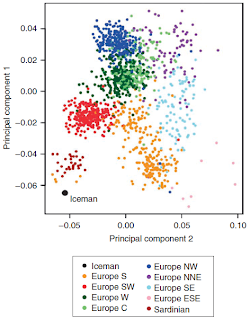 The most notable conclusion would seem to make Ötzi closest in all to Sardinians or more like   Corsicans, at least by Y-DNA. This one has been described now as G2a-L91, what is per ISOGG 2012 G2a2b (although the authors use the old nomenclature G2a4) and is most commonly found in Southern Corsica and the Corsican-speaking parts of Sardinia (Gallura).
The autosomal DNA has been compared with an all-Europe sample (the Behar 2010 one, I think based on the nomenclature used), to which a Sardinian sample was added. The result (right) does suggest a Sardinian (or Corsican) affinity of Ötzi.
Notice please that in the supplemental material the Ötzi dot achieves three different positions depending on the level of refinement: while all place Ötzi to the bottom left corner, he's exact position varies quite a bit - it's not like PC analysis (nor genetics overall) is rocket science, you know.
Also another caveat I have with this kind of analysis is that all it says is that Sardinians and Ötzi are very negative for both PC components, th Northern and the Eastern ones. The only association at the bottom left corner is a negative one: neither Nordic nor Greek, and this is not too informative.
Yes, the Y-DNA points to an association with Corsica (rather than Sardinia), what reinforces the suggestion posited by the autosomal DNA basic (but negative) analysis, still it would be nice if the authors would have bothered to do some 'Admixture' type of analysis as complement.
At the moment all we have is a negative: Ötzi, who belonged to a Cardium Pottery derived cultural group (Bocca Quadrata or La Lagozza, can't recall right now) and bears a quite clear Neolithic marker such as Y-DNA G2a, shows up as strongly non-Balcanic, unlike most modern Italians (Europe S sample).

It looks odd indeed... but it might be explained if we assume that from that time on, secondary (post Neolithic) Bronze Age flows from the Aegean (and Central Europe) altered gradually the genetic composition of Italy. This is supported by archaeology as far as I know: even before Mycenaean Greeks, the Aegean was influencing Southern and Central Italy more and more. This trend was reinforced in the late Bronze Age (Mycenaean colonization in the South, Etruscan migration in the Center) and the Iron Age (classical Greek colonization of Magna Graecia).
Before the Romans Italy was all or most of the time a recipient of cultural influences (from the Balcans, from SW Europe and from Central Europe) and did not, as far as I can tell, export culture except as secondary trampoline (the Cardium Pottery Case notably). Excepting the Cardium Pottery case, it acted more as a buffer between West and East and dead end than what its central Mediterranean position would suggest. Even in the Heraklean myth, original Greek version, the route to the fabled Hesperides does not go through Italy but North Africa. Only later, as the Romans rose to prominence, was Hercules made to journey back through Italy, something not specified in the original version.
I'm saying all this because it may explain why the Europe S (Italy) component tends so strongly towards the Balcans (and to lesser extent Northern Europe) but neither Ötzi nor Sardinians do, even if they look Neolithic-blooded to some extent.
Posted by Maju at Wednesday, February 29, 2012