The Gravettian culture in Central Europe

Even if five years old, I have just stumbled (at Aggsbach's Paleolithic Blog) on this very nice and extensive paper on the Gravettian of Central Europe, and it seems to me a must-read for anyone with some interest in Upper Paleolithic Europe or in general in the origins of Europeans.
Jiří A. Svoboda, The Gravettian on the Middle Danube. Paleo 2007. Freely accessible (in English and French). 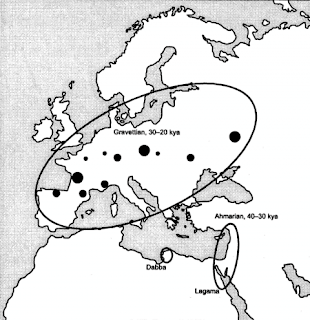 I'd say that the first sections are the most interesting ones, notably for the non-specialist reader. In them the author ponders the origin of Gravettian, concluding that it cannot be derived from early Upper Paleolithic cultures like Bohunician or Szeletian and that it must be instead an intrusive culture from West Asia (links to the older Ahmarian culture of the Levant).
The Kozarnikian group of Bulgaria's Kozarniki cave may signal the migration through the Balcans.
Once in Central Europe, the Early Gravettian or Pavlovian indicates discontinuity again by occupying different sites to those used by their predecessors, and also with different settlement tactics (large open air axial settlements in low altitudes and near rivers). Another difference is that burial then became a common feature, allowing us to find their remains much more easily (the famous "Crô-Magnon" type individuals).
The time-frame for this Pavlovian facies of Moravia and nearby areas of Austria and Poland is mostly 27-25 Ka BP (uncalibrated C14), with older dates only in Willendorf (Austria). A contemporary non-Pavlovian Early Gravettian site is Bodrogkeresztúr-Henye in East Hungary (c. 29-26 Ka BP).
The Early Gravettian is followed an Upper Gravettian of Central-East European scope (often described as Eastern Gravettian, as it extends into Eastern Europe). The author calls it Willendorfian-Kostenkian.
Finally an Epigravettian exists after c. 20 Ka BP, however Svoboda considers that this is a misnomer and more proper for the Mediterranean variants, which are more congruent with classical Gravettian typology, and proposes the name of Kasovian (on an Ukrainian site with a good stratigraphy for this period). This Kasovian would be in fact an hybrid of Gravettian and Aurignacian influences and begs for a comparison with the Badegoulian culture of Western Europe, sometimes considered the precursor of Magdalenian.
The latter sections deal with landscape and burials.
Posted by Maju at Friday, February 24, 2012