Brazilians are much more homogeneous than 'racial' categories suggest

This is a very revealing paper on Brazilian genetic makeup and the shallowness of racial classification in general:
Sergio D.J. Pena et al., The Genomic Ancestry of Individuals from Different Geographical Regions of Brazil Is More Uniform Than Expected. PLoS ONE, 2011. Open access.

Abstract
Based on pre-DNA racial/color methodology, clinical and pharmacological trials have traditionally considered the different geographical regions of Brazil as being very heterogeneous. We wished to ascertain how such diversity of regional color categories correlated with ancestry. Using a panel of 40 validated ancestry-informative insertion-deletion DNA polymorphisms we estimated individually the European, African and Amerindian ancestry components of 934 self-categorized White, Brown or Black Brazilians from the four most populous regions of the Country. We unraveled great ancestral diversity between and within the different regions. Especially, color categories in the northern part of Brazil diverged significantly in their ancestry proportions from their counterparts in the southern part of the Country, indicating that diverse regional semantics were being used in the self-classification as White, Brown or Black. To circumvent these regional subjective differences in color perception, we estimated the general ancestry proportions of each of the four regions in a form independent of color considerations. For that, we multiplied the proportions of a given ancestry in a given color category by the official census information about the proportion of that color category in the specific region, to arrive at a “total ancestry” estimate. Once such a calculation was performed, there emerged a much higher level of uniformity than previously expected. In all regions studied, the European ancestry was predominant, with proportions ranging from 60.6% in the Northeast to 77.7% in the South. We propose that the immigration of six million Europeans to Brazil in the 19th and 20th centuries - a phenomenon described and intended as the “whitening of Brazil” - is in large part responsible for dissipating previous ancestry dissimilarities that reflected region-specific population histories. These findings, of both clinical and sociological importance for Brazil, should also be relevant to other countries with ancestrally admixed populations. 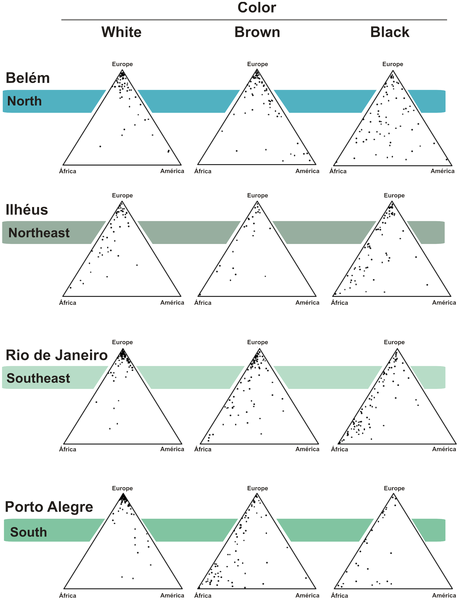 It is I think quite interesting to realize that racial categories are often meaningless in representing the real ancestry of individuals collectives. This is specially true for the brown (pardo) and black (preto)  categories but, in the north specially, it is also very true for the category white (branco). In this sense, the Brazilian census would probably do well dropping racial categories altogether, as they are obviously without meaning.
Overall Brazilians seem mostly of European ancestry (60-80%), with some lesser regional variability, as is very apparent in figure 3: 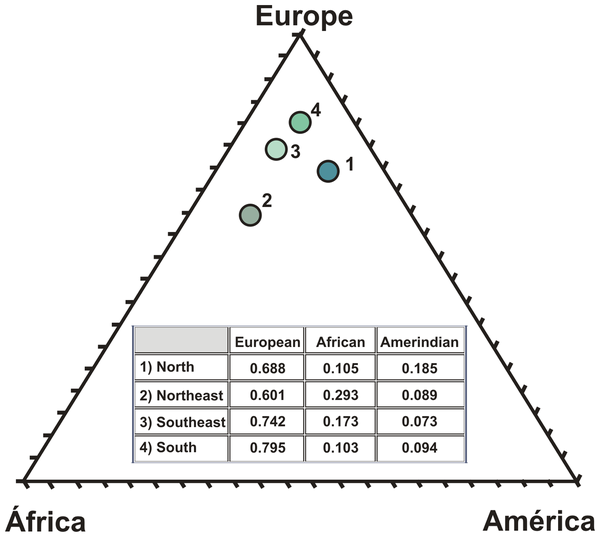 Native American ancestry is rather homogeneous by regions, making up 7-10% of the ancestry except in the North (Amazon) region, where it's double (19%). African ancestry is somewhat more important and also regionally variable: 10% to 29% (this last in the Northeast).
Notice anyhow that the samples were collected in six specific cities and that specially the vast Amazon region is probably under-represented (as the only sample comes from Belem, a large city of the coast). I'd dare say that the vast Brazilian interior (all samples are from the coast) must be stronger in Native American ancestry, even if we do not consider the surviving aboriginal populations, but only the creoles.
Posted by Maju at Thursday, February 17, 2011