There is a new paper analyzing the genetic structure of Swedes:
Elina Salmela et al., Swedish Population Substructure Revealed by Genome-Wide Single Nucleotide Polymorphism Data. PLoS ONE 2011. Open access.
Interestingly, Nothern Swedes strike as rather different from the rest, yet also distinct from Finns:
Legend for the above image:
At K=2 we can see the nowadays already classical dichotomy between Finnish and other North-Central Europeans.
At K=3 we get a third cluster (red) corresponding specifically to Swedes (or maybe Scandinavians in general) with some notable penetration in SW Finland but not in NE Finland. It's also apparent in Russia (but vanishes at a later stage, so disregard), Germany and somewhat in Britain/CEU. As the second most important declared ancestry of Utahns, after English, is Danish, we notice somewhat more importance of the Scandinavian component among them.
At K=4 we get the curious North Swedish distinctive cluster (green). The authors lament not having sampled Sami and Norwegians for comparison. However they do speculate to it representing a Sami element. This is in any case the most relevant discovery of this paper.
At K=5 we get a distinct East European component dominant among Russians and with important penetration in Germany, probably the result of Indoeuropean (and then also Slavic) migrations in the past. 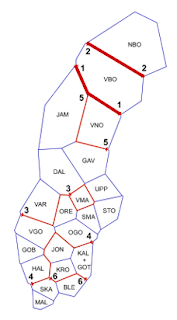 The authors mention that they have detected some genetic barriers in North Sweden, which they associate to the presence of the green component. This is represented in the image at the left, which is my modified version of fig. S7, whose legend reads:

Six zones of strong genetic change inferred by the Barrier software. The borders (in red) are numbered in decreasing order of strength, and they are based on FST distances that have been corrected for the geographical distance between provinces. Note that the FST values differ significantly from zero only for the first two borders.

That is why I emphasized with thicker lines the only two genetic barriers, which are statistically meaningful (1 and 2).
Posted by Maju at Friday, February 11, 2011