I just had to mention a paper on Austronesian genetics at one of the great open access publications, Bio Med Central (BMC), and now I have to mention another at the other major open access magazine: Public Library of Science (PLoS):
Tatum S. Simonson et al., Ancestry of the Iban Is Predominantly Southeast Asian: Genetic Evidence from Autosomal, Mitochondrial, and Y Chromosomes. PLoS ONE 2011. Open access.
Because good things always come in batches, right?
Well whatever the case, the Sea Dayaks or Iban people do not cluster well with Taiwan Aborigines or other possible source populations for the fabled Austronesian colonization of Island SE Asia. Nope, they cluster best with mainland SE Asia, notably Vietnamese, Thais and peninsular Malays.
For example, for autosomal DNA, we get the following graph (fig 2):

Where the Iban cluster best with some Indonesian (but not others) and Thais (again some but not others) but not with Taiwan Aborigines (and only poorly with Filipinos).
Not convinced? I cannot blame you because PC analysis suck and specially for autosomal genetics. They also provide a K=3 admixture analysis (fig. S1): 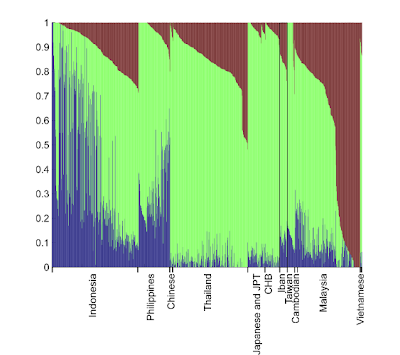 Here we can spot three components, neither of which is too specific. Still the red component seems strongest among Malaysian (not the Iban however), the blue component is most common among some Indonesians, while the green component is widespread by dominant in the mainland if anything (specially Japan/North China). Not too clear anyhow but for deeper clustering you probably want something else, like the HUGO paper.
Let's see the Y-DNA then (fig. 3):

This is more clear, right: here the Iban are almost like Vietnamese and then like other Sundaland Malays but not like Taiwan Aborigines nor Filipinos. So Y-DNA-wise they do not look particularly Austronesian recent arrivals but older arrivals from Indochina if anything.
MtDNA? Let's see:

Seems not again: Philippines and Taiwan are far away, while Sundaland, Orang Asli, Thais and Chinese are closer.
The authors conclude:

Another blow against Neolithic replacement nonsense.
Posted by Maju at Tuesday, February 01, 2011