Just a quick mention because I have such a long queue of stuff from Europe that I really have no time to look but very shallowly onto this study, which looks extremely interesting. Credit for the reference to Kristiina.

Two distinct population models have been put forward to explain present-day human diversity in Southeast Asia. The first model proposes long-term continuity (Regional Continuity model) while the other suggests two waves of dispersal (Two Layer model). Here, we use whole-genome capture in combination with shotgun sequencing to generate 25 ancient human genome sequences from mainland and island Southeast Asia, and directly test the two competing hypotheses. We find that early genomes from Hoabinhian hunter-gatherer contexts in Laos and Malaysia have genetic affinities with the Onge hunter-gatherers from the Andaman Islands, while Southeast Asian Neolithic farmers have a distinct East Asian genomic ancestry related to present-day Austroasiatic-speaking populations. We also identify two further migratory events, consistent with the expansion of speakers of Austronesian languages into Island Southeast Asia ca. 4 kya, and the expansion by East Asians into northern Vietnam ca. 2 kya. These findings support the Two Layer model for the early peopling of Southeast Asia and highlight the complexities of dispersal patterns from East Asia. 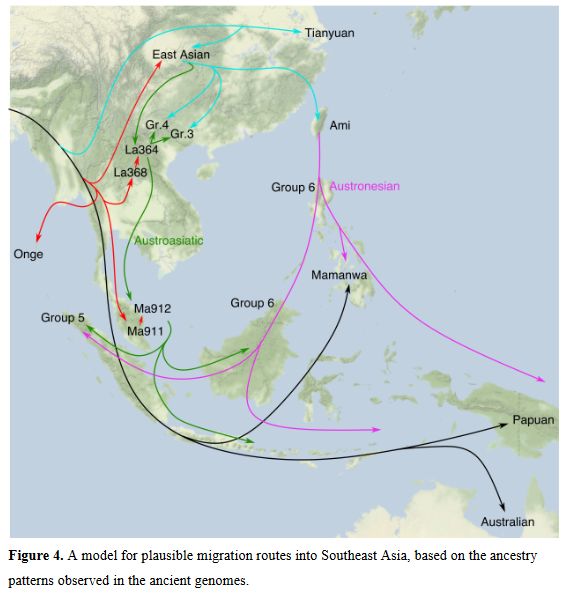