"Just for being published in Nature it does not mean it is necessarily wrong" (popular saying).

Iñigo Olalde et al., The Beaker Phenomenon And The Genomic Transformation Of Northwest Europe. doi:10.1101/135962 (pre-pub version, no way I'm spending 1/3 of my monthly income on this, in case you're willing to waste your money, it's been recently published in Nature)

Issue 1: All comparisons are made between Anatolia Neolithic or other Early Neolithic in some cases and Yamna or Corded Ware.  Late Neolithic is not used nor, critically, is Hunter-Gatherer populations or anything related.

This means that everything will be much more Yamna-like than it should, just because Yamna are 50% HG, while Early Neolithic are very low in this component.

This is very apparent in the PCA: 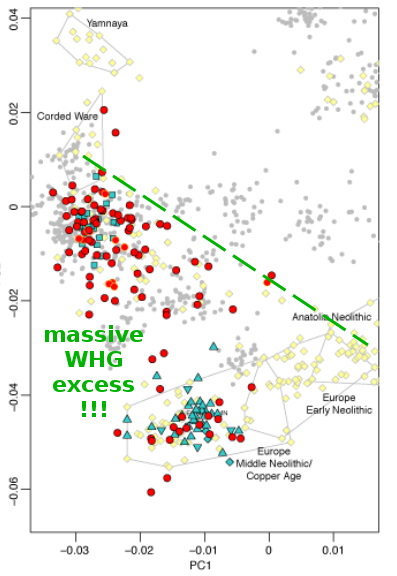 Issue 2: there is a huge sampling gap precisely where ancient mtDNA (and modern Y-DNA) tells us that the origin of the modern West-Central European genetics should be: in France and nearby areas like the Basque Country, West Germany. Sure: they sample some Eastern French sites but see "issue 1" above. 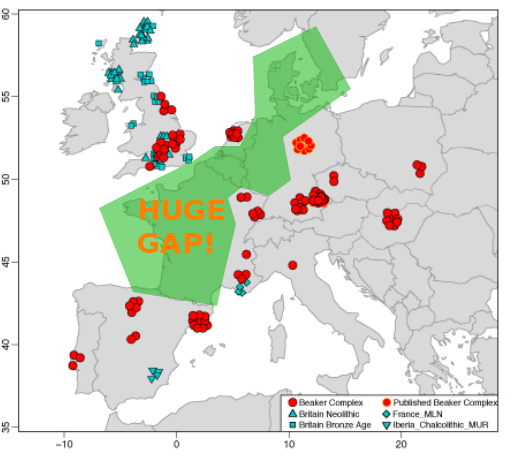