I must say that it seems a bit odd that, being colleagues of the same university, Dasakali and Skoglund/Malström have decided to publish such two strongly related studies separately. But, well, whatever...

The first study briefly compares the genome of a Chalcolithic Iberian farmer from El Portalón (Atapuerca) to modern Europeans and some previously published ancient genomes, mostly Neolithic but also one from Epipaleolithic Iberia (La Braña).

The study is just a very short synthesis and lacks detail but provides this PCA graph: 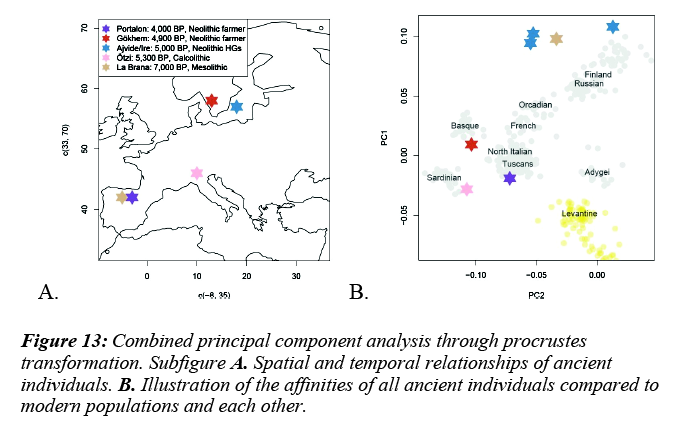 On it's own, it already provides evidence of ancient European farmers not being as homogeneous as the  Lazaridis sample (n=3 but all from near the Alps) may suggest. The Iberian sequence deviates more towards modern Italy than the Alpine ones (here represented only by Ötzi), who tend to cluster towards modern Sardinians. Also the Gökheim sequence from Southern Sweden, the only clearly Megalithic sample so far to be studied, clusters with Basques. But Gökeim is better addressed in the Skoglund paper in fact.

This is because Skoglund & Malström use more samples from Neolithic Scandinavia: four from the Gökheim site (Megalithic and Funnelbeaker farmers) and six from Götland's Pitted Ware late semi-foragers of the Baltic (probably with partial Eastern European roots).

The results are more directly visualized and comparable with those Dasakali and Lazaridis in the Principal Component Analysis:

Obviously not all is just a simple PCA, together we find these heatmaps that help us to better understand the affinities of the ancient farmers:


In fact Gökheim 2 shares a bit more genetic drift with Sardinians than with Basques, an that's probably the reason why she is located rather towards Spain and Italy in the PCA, even if they don't share greater genetic drift with these than with Basques and Sardinians (PCAs can be misleading). However the shared drift is probably less than among Alpine farmers, owing largely to Gökheim's greater aboriginal hunter-gatherer admixture.

In general, like other early European farmers, Gökheim people seem to align best with Western Mediterranean peoples, particularly those with low paleo-Siberian (MA1) affinity, which are Basques and Sardinians.

Judging on the PCA, there seems to be some diversity among them, with one being more extremely "Atlantic". It is very possible that in the Neolithic and Chalcolithic Atlantic Europe there were others like her (most Gökheim samples are female although I'm uncertain about this unnumbered one).

On the other hand, Pitted Ware sequences share greatest drift with modern Baltic peoples, including the oversampled Swedes but also with Eastern Baltics (Estonian, Finnish, Lithuanians). This last surely owes to the origins of this culture in Eastern Europe but in what regards to Sweden, it must imply that their kind of Eastern-like genetics were very strongly favored when the Kurgan macro-culture (Single Burials, part of the wider Corded Ware culture) took over the region c. 2500 BCE. Instead the ancient megalithic farmers quite obviously suffered a genocide in this part of the world.

Overall, it seems obvious to me by now that Eastern European genetics distributed by the long-term Kurgan expansion (Indoeuropeans) must have been somewhat similar to aboriginal Western European hunter-gatherers but with greater paleo-Siberian affinities (MA1-like), which they also distributed by Europe for the first time.

For a wider comparison with World genomes, take a look at figures S3 and S4 please. In them we can see that Ajv58 is comparatively closer also to South Asians, Siberians and Native Americans, while Gök2 is instead relatively closer to Palestinians, Arabians and slightly to Egyptians too (not apparent in the above graph but certainly in the global one).

This is quite interesting because it directly relates to the mysterious "Basal Eurasian" element that Lazaridis et al. detected in their ground-breaking study, which is more clearly perceived as something "Palestinian", with whatever NE African and/or residual out-of-Africa element in it, which partly detaches the ancient farmers from the main Eurasian ("out-of-India") branch.

Some of all this is also quite apparent in the attempts of Skoglund & Malström to infer the ancestry of the various paleo-populations:


The above "admixture graph" is identical in essence to fig. S6. However I find even more very interesting the fig. S7:


This alternative result has been produced by merely adding modern French and Sardinians to the analyzed pool and allowing for two extra admixture axes. The result is quite different:

Essentially the overall unity of all Europeans, ancient and modern is restored as a single derived branch distinct from the circum-Pacific populations. The deviation to "Basal Eurasianness" of Neolithic Europeans and Sardinians is instead largely explained by an admixture axis from the Dinka, which act as a proxy for whatever Red Sea area input in the early European Farmers. This is just as I expected and have tried to explain before, so I guess you understand why I do prefer this second admixture graph over the other.

In this sense, I feel that Skoglund & Malström could have done a bit better by testing more alternative models (different samples, different pre-definition of the admixture axes, etc.) but I guess it's good enough for their Swedish focus. Not so much for the pan-European one though.

It is also very striking that the French sample appears unrelated to any of the ancient samples, be them farmers or not. Instead they show up as a branch of their own with proto-Sardinian admixture. This probably owes to the fact that neither of the sampled ancient populations is directly ancestral to the French, unlike what happens with Lochsbour, for which the French show the longest IBD segments, indicating a more direct ancestry. So I guess that we can take the French branch as being partly Lochsbour-like, plus whatever Eastern European (but not Scandinavian) extra ancestry the Celts, Romans and Germanic tribes brought with them (and of course the strong Neolithic element indicated as paleo-Sardinian admixture). Sadly the analysis strategy is not designed to provide us with such information here, but it can still be inferred if we consider all the available data.

Of course most modern samples show less drift because they are more cosmopolitan populations than the ancient ones, whose demographic base should be more like that of Australian aborigines, the only modern sample that shows a similarly high drift parameter.

As concluding remarks, I wish to underline the greater aboriginal European (WHG or blue color) admixture in the Megalithic farmers of Gökheim, which resemble modern Basque genetics. It is very likely that more populations like those existed in the Megalithic axis from Southern Iberia to Southern Sweden, although naturally each one had its own peculiarities and we should not take Gökheim as any sort of ideal representative of such ancient Atlantic population but rather as one of its many likely subpopulations.

Before the Indoeuropean consolidation of the Corded Ware period, these Atlantic farmers must have greatly contributed to at least a preliminary stage of "modernization" of the Central Europan (and possibly also others') genetic pool, as discussed in this entry. Notice also that the demographic expansion was much greater with Megalithism than with Corded Ware and Bell Beaker and that this applies in general terms to nearly all studied regions, with the main exception being Jutland. However in Scania (Southern Sweden), there is a clearly second demographic expansion with the arrival of Corded Ware.

Sadly there is no direct comparison of modern Swedes as hypothetical admixture between Pitted Ware Chalcolithic foragers and Megalithic/Funnelbeaker farmers. It would have been interesting to know more details about that, especially if a third element from Germany, Poland or Russia is needed to explain their modern genetic pool, as I suspect, and in which apportions.

As for the Neolithic farmers, they were clearly somewhat more diverse than the Lazaridis study suggested, varying at least in their amount of "Basal Eurasian" and Western hunter-gatherer ancestry, and possibly also in other subtle aspects we still do not understand well, as suggested by El Portalón sample.
Their most direct legacy is in any case concentrated towards Southwestern Europe.
Posted by Maju at Saturday, April 26, 2014