This is a most interesting issue I forgot to discuss when previously addressing the massively interesting Lazaridis et al. study on European ancestry based on ancient autosomal DNA (see here and here).

Identity by descent (IBD) data shows interesting differences between populations in Supplemental Information's article 18. While Stuttgart's (early farmer) ancestry is more or less the same by both measures (Sardinians first, followed by Slovakians and some other Balcanic and Central European populations), there are important differences in the ancestry of Lochsbour (Epipaleolithic hunter-gatherer from Luxembourg). While the Danes score highest in overall IBD block number (rough relatedness to Lochsbour) it is the French who score highest in IBD length (indicating a more direct relatedness, even if in smaller amounts). 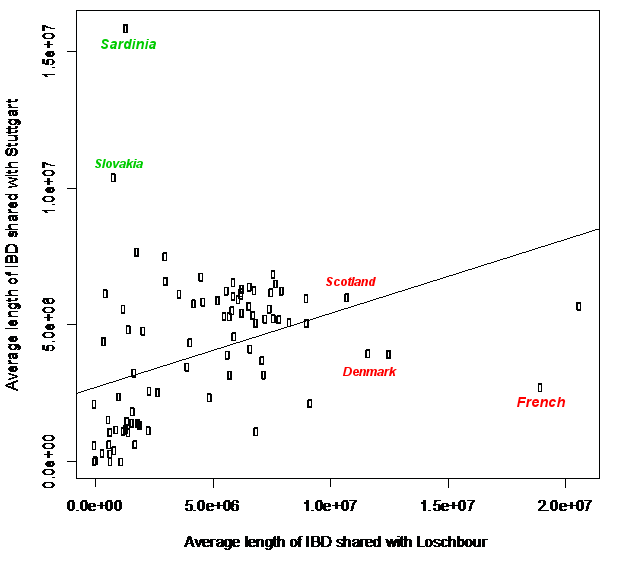 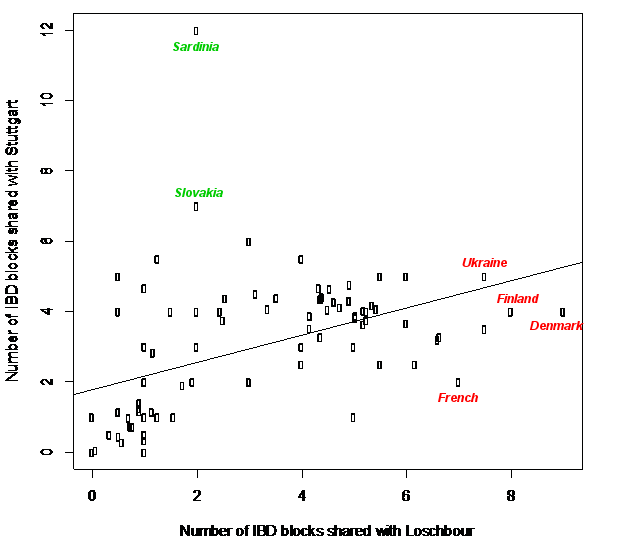 The difference between the French and Danish is quite significant, I believe, and seems to suggest that Lochsbour's relatives had a direct impact on modern French genetics, while the impact of Lochsbour as such on other populations should be considered more indirect (i.e. via other hunter-gatherer populations).

This implies that there was some important diversity among the hunter-gatherer groups that influenced modern European genetics and that Lochsbour must be considered a mere generic proxy. Possibly if Motala or La Braña would have been used as reference instead, we would get some important differences in the results, as would be the case if Balcanic or Eastern European hunter-gatherers would be thrown into the equation, no doubt.

You may have noticed that there are some notable samples unmarked in the graphs, that's because they are colonial populations such as Zimbabwean or North American Whites, whose exact ancestry is not easy to track. The green and red texts are my illustrative additions.

While not marked, I find also notable and rather perplexing that Lebanon shows up as the fourth non-colonial population more related to Lochsbour by IBD length, after Scotland but before Ukraine, the Netherlands and Sweden.

In any case you can parse the data for the 10 more notable samples of each measure in the supplemental material, chapter 18.