While not really a novelty, I bet that most readers have never heard of this (I had no idea myself admittedly). David Sánchez discusses this week at his (Spanish language) blog Noticias de Prehistoria - Prehistoria al Día the existence of several most intriguing conic screw pieces found in Gravettian and Magdalenian sites from Dordogne (Aquitaine, French Republic), a district that (because of its great density of findings and cultural centrality for Middle and Late UP European prehistory) I have sometimes dubbed the Paleolithic Metropolis of Europe.

What are these magnificent pieces of Paleolithic craftsmanship? Apparently they are nothing else that that waterskin stoppers. Don's Maps suggest (scroll down) that the waterskin's neck hole would be made with a long bone hollow piece (just get out the marrow and tie it tightly to the skin's neck with a couple of thin ropes after performing two grooves on the external surface of the bone piece), then just apply the screw stopper forcing the bone (which is hard but somewhat flexible) to adapt to it. Naturally the inner groove would be created as you repeat the process once and again, surely having to push a little more each time (the bone tends to expand somewhat under the internal pressure).

Why are they conical and not cylindrical like modern ones? Surely because the same stopper (hard high quality work) was expected to serve many different waterskins, with different neck sizes. Also the very process of creation of the neck's perfect fit requires of an initial process of expansion for which a cylindrical stopper was not fit.

It never ceases to amaze the ingenuity and creativity of our Paleolithic ancestors, right?

I just got feedback from Don Hitchcock (the author of Don's Maps and main ultimate source for this entry) saying that he found that the photographed stopper and the second drawn ones are the same (from Forneau du Diable and not Laugerie-Haute, as originally reported), complaining that the artist 'gilded the lily' more than a little with regard to the perfection of the screw thread.

I fear he must be right because some details in the handle are very similar. It is a bit disappointing but I believe that the original hypothesis about their use as stoppers stands anyhow.

Don Hitchcock has updated his page on the Paleolithic tools with other two example of water bag stoppers. These don't seem to have any clear spiral design in the screw but at least one uses instead parallel groves.

To the right: ivory stopper from Laugerie Haute Est.

Below: ivory stopper from Brassempouy (Aurignacian): 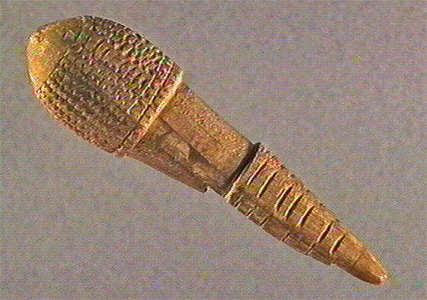