Guest article by Gail Tonnesen: Comments on “Origins and Evolution of the Etruscans’ mtDNA”

When discussing a recent revision of the ancient Etruscan mtDNA sequences, it became evident that haplogroup assignation was not really being dealt with by the authors, so Gail Tonnesen has dug on the matter further:

Comments on “Origins and Evolution of the Etruscans’ mtDNA”

In an analysis of Etruscan mtDNA Ghirotto et al. (2013) evaluated haplotype diversity in 30 samples of ancient remains from Etruscan burials that date to between 700-200 BCE. However, the authors did not identify haplogroups for these ancient remains. Analysis of the mtDNA data by haplogroup could provide additional insight into relationships among the ancients samples and to modern populations in the region, so we attempted to identify haplogroups for the 30 ancient mtDNA haplotypes listed in Table S1 of Ghirotto et al. These include 14 samples tested by Ghirotto et al. (2013), and 16 samples tested by Vernesi et al. (2004). 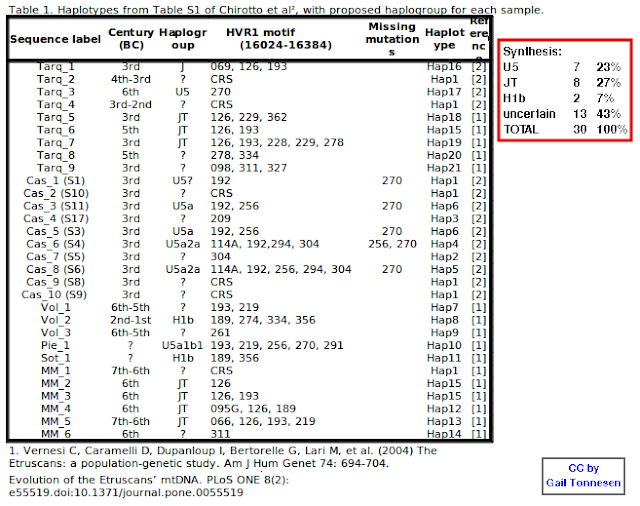 Ghirotto et al (2013) reported results in the mtDNA the control region at markers 16024-16384. Results were reported relative to the revised Cambridge Reference Sequence. These results should be sufficient to identify those haplogroups that have defining mutations in this region. We compared the ancient mtDNA haplotypes to Phylotree version 15. Seven of the haplotypes appear to be U5, however, the U5 defining mutation 16270 was identified in only two of these seven samples. Key defining mutations for U5 subclades that should be present were not identified in several of these samples. For example, samples Hap4 and Hap5 both appear to be U5a2a (based on the combination of 16114a and 16294). U5a2a should also have mutations at 16256, 16270 and 16526, but the test results did not report any of these 3 mutations in Hap4, and only found 16256 was reported in sample Hap5. Reversions at marker 16270 occur infrequently in U5, and it is possible that some of the ancient mtDNA samples could have a reversion at 16270, however, the probability is extremely low that that 5 of 7 samples would have this relatively rare reversion. Thus, based on these probable U5 samples, the reported results for the ancient mtDNA samples appear to have a high error rate of missed markers in their results.

Figure 3, the median joining network, has the haplotypes connected in a way that is inconsistent with their probable relationship in the mtDNA phylogeographic tree. We recommend re-evaluating the median joining network using the probable phylogenetic relationships among the samples. We also recommend that the coding region be sequenced for these samples to better determine their haplogroups and subclades, especially for the 13 of the 30 samples whose haplogroup cannot be determined from the control region results. We also recommend sequencing control region more completely because important defining markers for several of the haplogroups tentatively identified here are found in the region from to nucleotide markers 16385 to 16569.

Based on the 17 samples for which we were able to predict haplogroups, JT and U5 are the most common haplogroups in the ancient Etruscans samples. These do not appear to be related individuals because there is considerable diversity in haplotypes among the JT and U5 samples. However, these results are uncertain because of the possibility that the some markers were not reliably detected in the ancient mtDNA samples. Additional testing of the coding region and re-testing of the control region are necessary to fully evaluate the ancient Etruscan samples in the context of ancient and modern populations.


See also: Were the Etruscans after all Native Italians?
Posted by Maju at Friday, February 15, 2013