The single origin of these regional phenotype traits has now been tracked to a single allele of gene EDAR (Wikipedia, SNPedia), specifically to its variant EDAR370A, typical of East Asians, using a genetically modified mouse model.

An adaptive variant of the human Ectodysplasin receptor, EDARV370A, is one of the strongest candidates of recent positive selection from genome-wide scans. We have modeled EDAR370A in mice and characterized its phenotype and evolutionary origins in humans. Our computational analysis suggests the allele arose in central China approximately 30,000 years ago. Although EDAR370A has been associated with increased scalp hair thickness and changed tooth morphology in humans, its direct biological significance and potential adaptive role remain unclear. We generated a knockin mouse model and find that, as in humans, hair thickness is increased in EDAR370A mice. We identify new biological targets affected by the mutation, including mammary and eccrine glands. Building on these results, we find that EDAR370A is associated with an increased number of active eccrine glands in the Han Chinese. This interdisciplinary approach yields unique insight into the generation of adaptive variation among modern humans.

As the summary mentions, it has also been suggested that the variant influences tooth morphology, although this could not be demonstrated in the mouse model.


The mutation was found in a gene for ectodysplasin receptor, or EDAR, part of a signaling pathway known to play a key role in the development of hair, sweat glands and other skin features. While human populations in Africa and Europe had one, ancestral, version of the gene, most East Asians had a derived variant, EDARV370A, which studies had linked to thicker scalp hair and an altered tooth shape in humans.

The ectodysplasin pathway is highly conserved across vertebrates -- the same genes do the same thing in humans and mice and zebrafish. For that reason, and because its effects on skin, hair and scales can be observed directly, it is widely studied.

This evolutionary conservation led Yana Kamberov, one of two first authors on the paper, to reason that EDARV370A would exert similar biological effects in an animal model as in humans. The HMS research fellow in genetics developed a mouse model with the exact mutation of EDARV370A -- a difference of one DNA letter from the original, or wild-type, population. That mouse manifested thicker hair, more densely branched mammary glands and an increased number of eccrine, or sweat, glands.

The authors argue for a selective pressure but I find hard to imagine which one could it be. Therefore I rather lean again towards a random founder effect.

Unless... notice that in the figure accompanying the summary also mammary gland density is shown as increased, what could result in improved nutrition for babies, what would indeed be selected for (assuming the rest of effects are neutral or quasi-neutral).

Anyhow, linking it obliquely to the previous entry (on Neanderthal admixture in East Asians), I have often wondered about the origins of straight hair in general, because it is obviously not ancestral in our species (all "Aboriginal African" populations have thinly curled hair, as do some non-Africans, especially remote Tropical populations like Papuans or Andamanese) and my main hypothesis is that it could be a Neanderthal genetic influence, possibly selected because of less intense need of head ventilation (for which thinly curled "African" hair seems best) and more intense need instead of protection against cold and rain. The thick hair East Asian variant might in this case be just the extreme variant of a more widespread Neanderthal introgression. Just food for thought.


Update (Feb 20): Razib Khan also finds the suggested "selection sweep" dubious, and his discussion of this paper is very interesting to read.

An interesting detail that I could not gather clearly from the abstract is that the allele causes (at least in mice) smaller breasts and not just denser mammal glands.

But surely the most interesting item is this map of the frequencies of the EDARV370A allele through the World, being very much and quite strictly limited to the peoples displaying what is classically described as the Mongoloid phenotype: 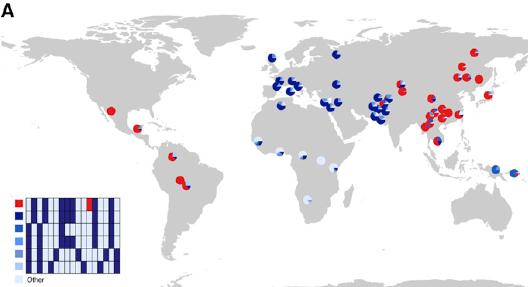 An intriguing issue is also the lack of it in Europe, even among peoples of well-known Siberian/East Asian low-level admixture (Northern Russians). I'm tentatively imagining some sort of "racist selection" against the trait among those peoples, as it expresses an exotic, possibly not favored (to put it mildly), very apparent phenotype. Food for thought.


Update (March 22 2014): Kevin Brook mentions this database, which shows the "East Asian" C allele present in some other populations than the ones reflected in the map above, notably some South Asians (rather high frequencies in some cases) but also (at very low frequencies) in some Africans, West Asians and Eastern Europeans. At the very least it is an interesting counter-point.
Posted by Maju at Saturday, February 16, 2013