Stone Pages' Archaeonews includes in its latest newsletter a number of interesting references to new findings on Native American Prehistory:

This ritual enclosure of the intriguing Hopewell culture, which is being dug now, is dealt in detail at Ohio Archaeology Blog → link 1, link 2. 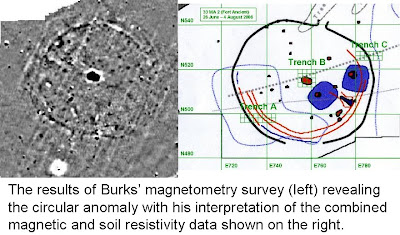 These would be part of the Adena culture, precursor of Hopewell, and this site in coastal Maryland has yielded not just evidence of them but layers and layers of associated artifacts, with the oldest being as early as 10,000 BP (most are from 5000 to 1000 BP however).


Early Native American tribes engaged in reburial rituals. Every year, 10 years, or more, a group would gather the remains of their dead and commit them to a common burial ground.

Iroquois tribes were noted for their reburial rituals as were the Nanticoke who took their ancestors’ remains with them when they moved to Pennsylvania from the Eastern Shore.

Ossuaries held the the dead whether nothing but skeleton or fresher remains. But the bodies were intact, or mostly so. The difference at Pig Point is that all the bones were smashed, broken on purpose. And so were thousands of artifacts such as fancy Adena points, beads, gorgets, and other items. All broken into bits.

The site of Tremper Mound (Ohio) has been known for a century now but it was assumed that the many pipes found there were carved from local stone. That has been now demonstrated to be mostly wrong: only less than 20% of the pipes were made from local materials, instead 65% were carved in flint clay from Northern Illinois and 18% in catlinite from Minnesota.

50 km north of Mazatlan (Sinaloa, Mexico) lays the rock art  site of Las Labradas. Not far from there, at La Flor del Océano, archaeologists have now discovered spearheads, knives and other tools made of stone.