Yet another paper on horse genetics is available these days.

Horses were domesticated from the Eurasian steppes 5,000–6,000 years ago. Since then, the use of horses for transportation, warfare, and agriculture, as well as selection for desired traits and fitness, has resulted in diverse populations distributed across the world, many of which have become or are in the process of becoming formally organized into closed, breeding populations (breeds). This report describes the use of a genome-wide set of autosomal SNPs and 814 horses from 36 breeds to provide the first detailed description of equine breed diversity. FST calculations, parsimony, and distance analysis demonstrated relationships among the breeds that largely reflect geographic origins and known breed histories. Low levels of population divergence were observed between breeds that are relatively early on in the process of breed development, and between those with high levels of within-breed diversity, whether due to large population size, ongoing outcrossing, or large within-breed phenotypic diversity. Populations with low within-breed diversity included those which have experienced population bottlenecks, have been under intense selective pressure, or are closed populations with long breed histories. These results provide new insights into the relationships among and the diversity within breeds of horses. In addition these results will facilitate future genome-wide association studies and investigations into genomic targets of selection.

Regardless of what the authors claim, previous studies have suggested dual origins (steppes and local domestication at or near Iberia) or even multiple ones for modern horses and this paper's data does not say otherwise but actually reinforces this notion. For example let's have a look at their fig. 1 (duly annotated by me): 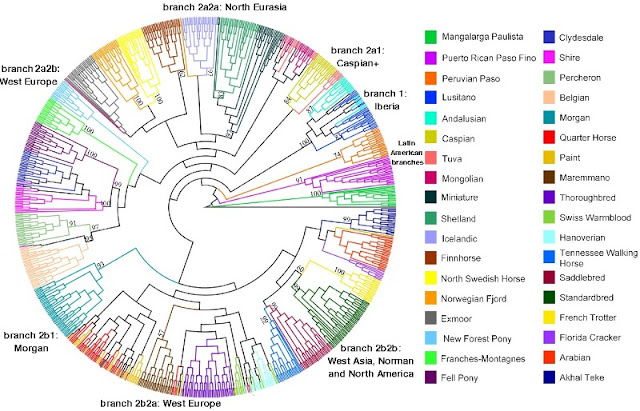 Ignoring by the moment the Latin American breeds, which stem directly from the root of the tree, the oldest division is between the Iberian breeds (Lusitano, Andalusian) and all others, which in turn split in two groups, both scattered in Europe and Asia (different parts of Asia however). This would seem to confirm the dual origins theory.

However there are two more elements to consider: on one side the Northern Iberian breeds (apparently even older than the Southern ones, per Warmuth 2011) are not being considered here.

The other element to ponder is the most strange position of the three Latin American breeds. As there were no horses in America at the arrival of Europeans, the origins of such anomaly must be in the Old World, meaning probably that these breeds retain genetics of even older populations. These could be the already mentioned Northern Iberian breeds but they are said to have some admixture from Berber horses (or Barb) as well and this population (argued to be very old) has not been subject to any genetic study as of now.

Hopefully future studies on the matter will consider these issues.
Posted by Maju at Thursday, January 31, 2013