Very skeptic on claim of Neolithic flow from India to Australia

I feel quite skeptic about the claims held by this paper but in any case it is worth mentioning.

The Australian continent holds some of the earliest archaeological evidence for the expansion of modern humans out of Africa, with initial occupation at least 40,000 y ago. It is commonly assumed that Australia remained largely isolated following initial colonization, but the genetic history of Australians has not been explored in detail to address this issue. Here, we analyze large-scale genotyping data from aboriginal Australians, New Guineans, island Southeast Asians and Indians. We find an ancient association between Australia, New Guinea, and the Mamanwa (a Negrito group from the Philippines), with divergence times for these groups estimated at 36,000 y ago, and supporting the view that these populations represent the descendants of an early “southern route” migration out of Africa, whereas other populations in the region arrived later by a separate dispersal. We also detect a signal indicative of substantial gene flow between the Indian populations and Australia well before European contact, contrary to the prevailing view that there was no contact between Australia and the rest of the world. We estimate this gene flow to have occurred during the Holocene, 4,230 y ago. This is also approximately when changes in tool technology, food processing, and the dingo appear in the Australian archaeological record, suggesting that these may be related to the migration from India.

The evidence for this claim is all derived exclusively by statistical inference on autosomal DNA. Suspiciously enough, even if the authors claim admixture levels of as much as 11% and as recent as a mere 4000 years ago, no patrilineage (Y-DNA) nor matrilineage (mtDNA) [correction: see update below] has been ever detected that could be associated with this purported migration.

Additionally c. 4000 years ago Southern India, the alleged origin of the genetic flow, was already immersed in a flourishing agricultural economy and it looks very strange that the migrants, people who were exchanging crops with Africa for example, would not carry a single element of this new economy to the island continent. Of course this inconsistency could easily be fixed by merely arguing that the molecular clock estimates used tick too quickly, which is a general problem anyhow and therefore no real surprise.

If the hypothesized migration happened earlier, in the Epipaleolithic or Late Upper Paleolithic, then it would also be easier to explain that, with smaller populations, genetic drift could have caused the extinction of whatever Indian uniparental markers that the migrants carried with them initially. It still causes my eyebrows to rise instinctively.

Even then, if this was the case, we should be able to identify some sort of techno-cultural elements that the migrants may have carried with them, like microlithic stone technologies or whatever. As far as I know nothing of the like exists.

The only techno-cultural burden that the migrants might have brought with them to Australia would therefore have been the dingo, but this dog has lots of relatives in Island SE Asia, where the authors could not detect any significant Indian admixture.

So the hypothesis looks weak to me. Let's see the evidence they present: 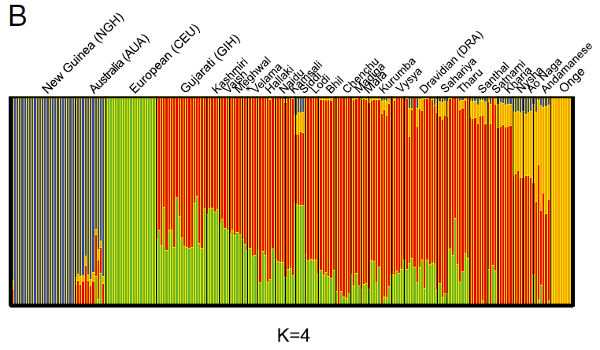 Above we can see the ADMIXTURE K=4 result, probably not the optimal one (which would probably produce an Australian-specific cluster (mostly but not fully masked as Papuan) and surely two different Indian ones, partly masked as European and Onge affinity) but the one the authors decided to show us as evidence for their hypothesis.

Not only this is surely not the optimal clustering level but also Australian Aborigines are comparatively undersampled, while Indian weight is overwhelming. This is a clear example of how NOT to design a scientifically useful sampling strategy for ADMIXTURE-like comparisons like this (because oversampled populations tend to overshadow the rest just by the weight of numbers).

As it is, this graph proves nothing but rather suggests that some Indian affinity is part of Australian Aborigine ancestral or founder specificity, when compared with Papuans. This may have many explanations first of which is a mere artifact by reason of a poor sampling and depth design of the experiment. ADMIXTURE is a powerful neutral tool, just a like a test tube or the Geneva particle accelerator, but what we do with it may well not be neutral, either by reason of mischievous manipulation or mere error.

In this case I find the test very poorly designed and executed. If I have some time later in the weekend, I may try to perform an alternative test according to my humble possibilities - I promise nothing however.

A complementary test that the authors perform used Tree Mix. As I have discussed elsewhere, TreeMix often produces very strange results and I do not consider it a reliable tool at all, but for whatever is worth here it is what they got: 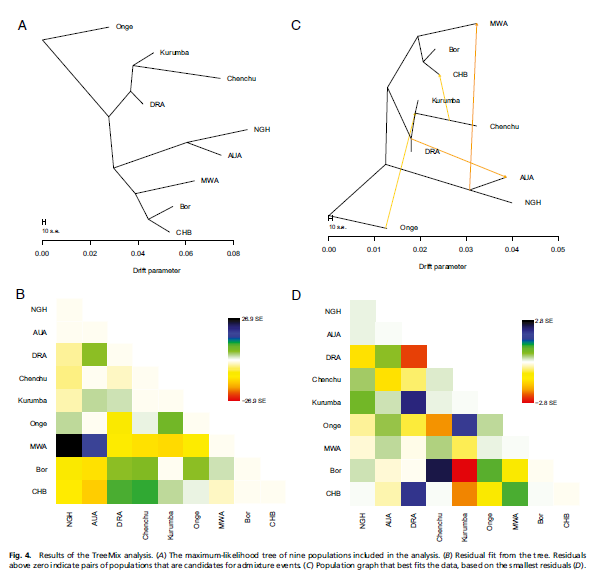 While the purported migrations generated by the Tree Mix algorithm appear to suggest a secondary genetic flow from India to Australia (orange arrow at C) the data on which such result is based (D) only gives the most tenuous level (green) of extra genetic affinity between Southern Indians (DRA) and Australian Aborigines (AUA). Meanwhile the highly questionable algorithm identifies Dravidians and North Chinese (CHB) as being genetically very close (blue), when they are not in fact.

So what do I get from this paper? TreeMix' usual senseless noise and apparent mismanagement of ADMIXTURE, a powerful tool when used properly.

Less than inconclusive, I'd say. But your take of course.

Update: G Horvat (see comments) points me to Kumar 2009 (so far unchallenged at PhyloTree)  for a shared mitochondrial lineage between Australia and India, known as M42. This haplogroup has the following structure (each → indicates a coding region mutation according to PhyloTree, Kumar originally listed a few more):

This allows for a potential mtDNA backing of this purported connection, however it is a very small lineage and Kumar claimed that M42 coalesced long ago, in the context of the first colonization of Asia and Australasia by Homo sapiens:

The divergence of the Indian and Australian M42 coding-region sequences suggests an early colonization of Australia, ~60 to 50 kyBP, quite in agreement with archaeological evidences.

Yet the relatively long stem leading to M42a does allow for a later time-frame of arrival to Australia. Neolithic anyhow looks still most unlikely to me.

An important element to consider here are the origins of the dingo as the Australian wild dog is known. This dog variant suffered a strong founder effect upon arrival to Australia described mainly by two variants of the haplotype A29. This lineage only links to East Asia however, having arrived almost without doubt, via Indonesia from mainland East Asia (either Indochina or China or both).

It is clearly not related to Austronesian expansion and could have arrived either within the early Neolithic of ISEA (arguably Austroasiatic in language) or even earlier. At least one of the papers I checked rather supports a pre-Neolithic introduction and certainly before the archaeologically supported age of c. 3000 years ago.

The Y-DNA of dingos also shows a strong founder effect (only two haplotypes, with overlapping but distinct distributions) and again the most obvious connections seem to be in SE Asia.

Update (Jan 18): It is probably interesting also to mention that Australian Aborigines show no difference with Papuans in their overall amount of Denisovan ancestry. This also appears as contradictory with the idea of significant external admixture, which should have diluted at least minimally that Denisovan component (Indians have none).


Update (Apr 7): A new "working paper" has been published on this matter, sharing my critical stand towards the sloppiness of Puhach's team but still considering plausible a Holocene gene flow from India. I have commented in a new entry.