This seems a very important paper because, if everything is correct, it is the first peer-reviewed publication to establish conclusively that mitochondrial haplogroup H, the most common matrilineage of Europe today, existed in Paleolithic populations in Europe, specifically in Cantabria, Spain.

There have been previous reports of such important presence of mtDNA H in the area, notably Chandler 2005 (on Epipaleolithic and Neolithic Portuguese) and Kéfi 2005 (on Upper Paleolithic Moroccans). However both studies were informal for some reason, what has been used by some to grasp for straws in their claim of this lineage having arrived to Europe (and North Africa) only after Neolithic and oversimplify the Paleolithic genetic pool of Europe to almost only variants of haplogroup U (never mind that U is such a large, ancient and widespread haplogroup that saying "U" is almost like saying nothing).


Edited section: the authors did test for RFLPs, the haplogroup assignation is as good as it can be.

After the first read to the paper my impression was that they had only tested the HVS (both subsectors I and II), leaving some, even if smaller, doubt about the adscription of the Cantabrian Magdalenian lineages to mtDNA H.

But, luckily for truth, Jean Lohizun (see comments) found that the authors, who are partly the same team as Izagirre & De la Rúa 1999 and are using the same methodology up to a point, have actually tested not for coding region SNPs but for a standard list of RFLP markers. However the mention is so cryptic that it is most difficult to find:

In order to classify the mitochondrial variability of the individuals analyzed in this study, we proceeded to amplify 11 markers, which are required for defining the 10 Caucasian haplogroups described [63]. The protocol and primers are described in [17], [20], [42]. The digestion patterns were verified using a fragment Bioanalyzer (Agilent Technologies).


This seemed to imply that when the authors say "H" they mean -7025a (aka -Alu I) but this marker as such are listed nowhere that we can see easily.

So I squeezed my mind until I concluded that Jean must be correct but a very slight doubt remained, so I emailed the authors, who quickly responded confirming Jean's keen reading.

Translation: In order to know with greater certainty the haplogroup, RFLPs were performed, which are a technique that allows for evaluation of punctual mutations in the coding region of mtDNA.


She added in relation to a previous study of her authorship:

Translation: We have also performed PCR-RLFPs with the purpose of determining the SNPs from the coding region and therefore confirm the haplogroup to which each of the haplotypes obtained by sequenciation belong. The enzimes we used appear in several bibliographic citations in the article (17, 20, 42, 63). About the question that you ask on the matter of the determination of haplogroup H, the answer is that we have indeed used the enzyme Alu I to determine the SNP in position 7025 of the coding region of mtDNA.


This should dispel any doubt: there was mtDNA H (and H6) in Magdalenian Cantabria.

(End of the edited section)


In any case these are the results as reported by the researchers (and synthesized by me in a single image): 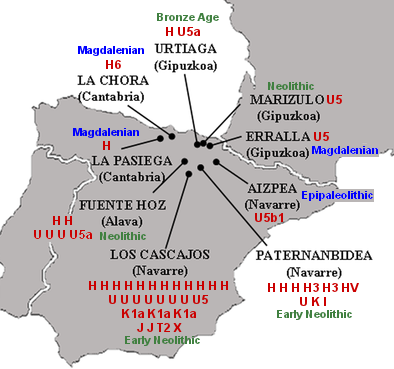 Notice that the dots are not really precise in their geographic locator role (I may try creating a better map later).


Instead of using numerals I repeated the name of the reported haplogroup with the intention of giving a more visually intuitive impression (without going through the process of creating charts).

The results for Paternabidea (tested for coding region markers) were discussed in November. They basically seem to establish that modern Basques are almost identical to Neolithic Basques.

But what about Paleolithic ones? The results of this one study rather suggest that a little bit of both: on the side of continuity, the same U5 sequence is reported for Erraila (Magdalenian) and Marizulo (Neolithic) but, on the side of change, all Paleolithic Basque sequences (n=2) are U5 lineages, while U5 today is a much less important matrilineage.

It may well be argued that this result is a fluke, a coincidence, but it is consistent with what we see in Epipaleolithic Central and North Europe (mostly U5 with some U4, Bramanti 2009), suggesting that, while the model of recolonization of much of Europe from the Franco-Cantabrian region may well be correct, the story does not end there at all.

On the other side we see that the dominant lineage today among Basques and Western Europeans in general, haplogroup H, was already present in Magdalenian times in Cantabria, what is consistent with it being found in Epipaleolithic Portugal and Oranian Morocco and really puts to rest the hypothesis that promoted that it had arrived from West Asia with Neolithic colonists (something argued as a matter of fact but without any clear evidence).


Food for thought (a hypothesis)

As of late, although I have yet to formalize it somehow, I've been thinking that a serious possibility is that mtDNA might have spread partly with Dolmenic Megalithism. While there is some apparent Neolithic expansion of H in the Basque area (apparent in this paper and resulting in an almost modern genetic pool), in other parts of Europe this is less obvious, with H showing up but not reaching modern levels just with Neolithic. In fact the loss of other Neolithic lineages like N1a strongly suggests that the populations of Central Europe were largely replaced after the Early Neolithic. Where from? Again from Southwest Europe, I suspect but not in the context that was once believed of Magdalenian expansion, but maybe in the context of Megalithic expansion instead, with origin not in the Franco Cantabrian region but in Portugal.

This is just a draft hypothesis that I have mentioned before only in private discussions or at best in the comments section somewhere, and certainly it would need more research. My main argument is that before these results for Cantabria, the only pre-Neolithic location where the data clearly suggested very high levels of mtDNA H (near 75%) was Portugal (Chandler 2005) and Portugal played a major role in Neolithic and Chalcolithic Western Europe. As I said above, ancient Portuguese apparently developed the Dolmenic Megalithic pehnomenon (culture, religion...), later they developed some of the earliest Western European civilizations, since the Third millennium BCE, specially Zambujal (also at Wikipedia), which were central elements of this long-lasting Megalithic culture and later of the Bell Beaker phenomenon as well.

And we need very high levels of mtDNA H in a colonizer population to changed the genetic landscape from c. 20% H into c. 45% H, we need something like a 70-80% H ancestral population unless replacement was total, what I think unlikely.

What happened to that overwhelmingly H population of Portugal (assuming that the hypothesis is correct)? They were probably colonized in due time, possibly in the Bronze Age (the mysterious archaeological "horizons" that replace urban life in much of Southern Portugal in that period with their strange crab-shaped elite tombs, vaguely resembling Mycenaean circular walled ones)  and/or in the period of Celtic invasions from inland Iberia later in the Iron Age (Hallstat periphery).

It's just a tentative hypothesis so far but one that I believe I must state for your consideration.