Claim that Japanese are 60-72% Neolithic

An open access letter claims that modern Japanese are 2/3 of Neolithic ancestry (except Ryukyuans, who'd be 2/3 Paleolithic instead).
Yungang He et al., Paleolithic Contingent in Modern Japanese: Estimation and Inference using Genome-wide Data. Nature 2012. Open access.
The explanation is however not really clear for me and, looking at their own data, I can't really accept such conclusions easily: 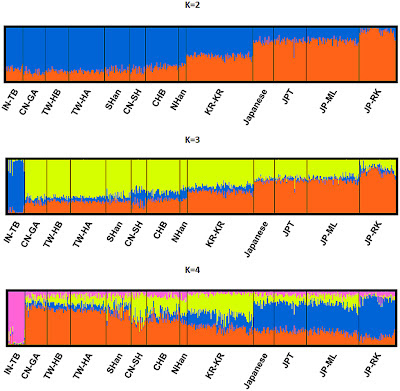 Only the yellow component (at K=4), almost totally absent in the Ryukyuans and dominant among North Chinese and Koreans, the likely parent populations of the Yayoi farmers, can be considered to inform the input of such immigrants to Japan. The exact apportions are not detailed anywhere in the letter but it seems to be c. 35% among Koreans (KR-KR) and Shanghai Chinese (CN-SH) and slightly above 20% among North Han (NHan, CHB).
By comparison mainland Japanese (Japanese, JPT, JP-ML) show c. 10% in most cases. IF the parent proto-Yayoi population would be Koreans, then Japanese would have less than 1/3 Yayoi blood, while if the proto-Yayoi is equated to Northern Han instead, then the result would be at most 50%.
In the case of Ryukyans, the Yayoi input would be negligible, almost zero. They'd be almost 100% Jomon, assuming this concept applies to the Ryukyu islands at all.
In truth I do not know what to think of this article other than it seems confusing and inconsistent with its own data.
Posted by Maju at Tuesday, April 10, 2012