This is sure going to cause some heated debates:
Darren Curnoe et al., Human Remains from the Pleistocene-Holocene Transition of Southwest China Suggest a Complex Evolutionary History for East Asians. PLoS ONE 2012. Open access.
See also the press release (Eureka Alert) and a photo gallery (Live Science).
And this is what is all about: 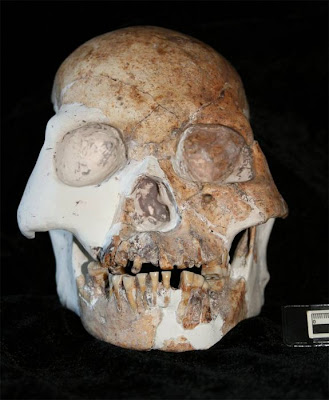 It's not the skull of Darth Vader, although I know you thought so as soon as you saw it, but actually that of a person living some 14,000 years ago at Longling cave, known as Longlin 1.
The authors of the paper argue on craniometric grounds that the specimen may not be a modern human, however in all PC analysis the skull falls (oddly enough) within or very close to modern human clusters. Only in the PC3 some differences show up.
In fact the closest among those skulls analyzed in fig. 8 is Mai Da Nuoc[PDF], an Early Hoabinhian skull from nearby Vietnam, which is claimed to be Australoid (but does not look at all like the Australian skulls I'm familiar with, normally quite broader).
In fact I have been searching and I found at least one skull that looks a lot like Longlin 1: Peñón woman from Mexico:
She's one of a number of Paleoindian skulls that have puzzled prehistorians because they are not quite like most modern Native American skulls. However to my eyes, the Peñuelas skull (Chile) skull is not that different, even if it is also more like modern Native American ones.
Also to my eyes, those very marked cheek bones (regardless of whether they may have been produced by mastication) remind me of one of the most characteristic traits of the so-called Mongoloid type (which is quite unreal and plural in fact): prominent cheekbones that give the face a flat appearance.
But I'll leave that to the experts. Not worth bumping heads for something that may well be partly epigenetic/environmental for all I know.
What I do not see is any ground for the claims of the authors that it could be a newly found species. They even have worked a fancy reconstruction that makes Longlin 1 to look like a well-known reconstruction (by the same author) of the notorious Hobbit (when the skulls do not look at all similar):
Notice please how any trait that could make him look Mongoloid (East Asian or Native American) has been scrapped from the reconstruction: he has dark brown skin, beard (which could well have been shaven by a professional just yesterday) and a hairy body, a very broad nose that does not fit at all with the small triangular orifice, absolute lack of epicanthic fold - plus very small ears that make him look odd.
Another analyzed skull from the same area is Maludong 1704, of which only the vault remains. This one overlaps in the analysis (fig. 9) with Crô-Magnon 1, however when more samples are added (fig. 10) some archaic skulls (H. erectus) also show up close, as do again CM1, early African H. sapiens and Nazlet Khater 2.
For me, with due caution, modern proto-Mongoloid H. sapiens (anomalous) but your call: the debate is served.


Update (Mar 17): I must mention that the excellent anthropological artist Zaender (which I have mentioned before) has also produced his own versions of the Maludong people without most of the exotic fancy of Schouten's reconstruction:


He has another example at his blog: Regional Ancestry Bands.

The ears still look small to me and the nose and lips unnecessarily too wide but it is probably more correct re. eyes and hair.

In any case it makes evident that it's very difficult to actually reconstruct a face from just a skull when all the expressiveness and even most ethnic traits are in the flesh and skin, being impossible to discern from a mere skull.

Another interesting reconstruction by Zaender (he drew the nose smaller on my suggestion):


See the discussion below and at his blog.

Also very interesting and surely important is the argumentation by Biological Anthropologist A.P. Van Arsdale that the main diveregent measure is the zygomatic bone but this one is fractured in several points, what may distort the results singnificantly: