(Sephardi) Jews in the context of the Levant and Anatolia

In June 2010, in rapid succession, we had the opportunity of learning from two papers which studied Jewish genetics in the context of wider samples.

The first one (Atzmon 2010 - PPV, discussed by me here) showed us, even if hidden in the supplementary material only, that the main Jewish cluster was extremely close to their "Turks and Cypriots" sample, specially to some of them (Cypriots apparently): 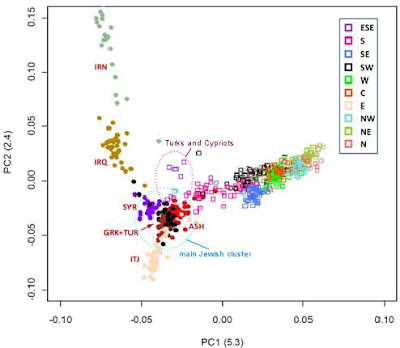 This central or pivotal group of Jews, marked as GRK+TUR and SYR, are the so-called Sephardi, which, in spite of their name (Sepharad means Spain) do not necessarily originate in the Iberian peninsula but rather share historically a pan-Mediterranean type of ritual, distinct from that of Ashkenazim and other Jewish populations (see also this article if you wish to understand better the complexity of Jewish ethnic divisions).

Just a few days later we got Behar 2010 (also PPV, discussed here), which did not deepen enough in the component analysis, in my understanding, but determined at least that Western Jews (Sephardi, Ashkenazi and Moroccan Jews) were of West Asian origin apparently.

However how exactly they related with West Asians was mostly unresolved (excepting that Palestinians have a lot of genetic distinctiveness and this was not shared with modern Jews nor nearly any other population at any meaningful level).

So, as I began toying around with ADMIXTURE, using the very basic but functional instructions by Razib, one of the ideas I had to explore were Western Jews (other Jewish communities seem to be derived from their host populations but Western Jews appeared as West Asian in these studies).

I doubted whether to retain the Ashkenazi and Moroccan Jewish samples or just work with Sephardites. In the end I retained them... but then I had to correct and start all over. Why? Ashkenazim specially cluttered the analysis with their extreme specificity (possibly because of some extreme bottleneck in their origins and/or inbreeding, although I can't say for sure).

The results were hardly a satisfactory answer for the question I meant to ask: how do Western Jews relate with the diversity of Anatolia and the Levant, the area where they probably originated? But rather placed these two communities as extremes in the area studied, as unlikely references rather than being referred to the wider native populations. Example: 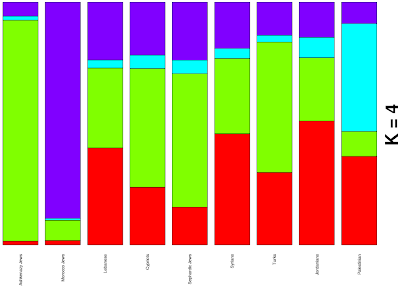 Instead Sephardi Jews showed up as less strikingly monolithic and had been found in previous studies to be, quite obviously, central to the Jewish diaspora. So I decided to start all over retaining only Sephardi Jews, which should be enough to give the key answers about Western Jewish origins.

This analysis was more productive. The whole run is as follows: 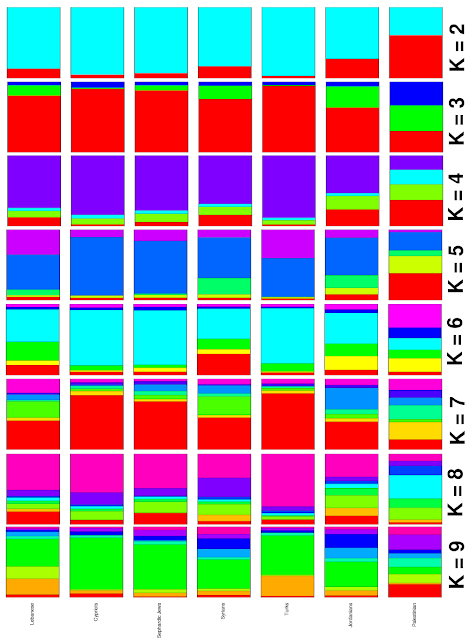 The deeper K levels are not really too informative, specially not for the matter at hand, the origin of Sephardi Jews (and by extension all Western Jews probably). Probably the greatest interest is between K=4 and K=6. I decided to retain the last one as main snapshot: 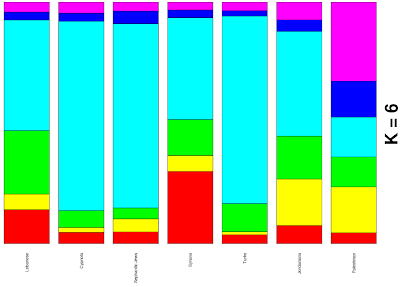 The labels of the components in the last two images (bottom and right respectively) are a mere conceptual reference.


Since K=2 there is an obvious distinction between Palestinians and the rest. This is coincident with what we find in Behar 2010 for example and what I have found in previous analysis: that Palestinians show a marked distinctiveness even in West Asia. My hypothesis is that they retain best a distinctiveness that may be as old as the Kebaran culture or even older. I understand that this means that, very possibly, Palestinians are the true descendants of historical Jews, Canaanites, etc.

However this analysis was not designed to discern Palestinian affinities but those of Jews, so I won't discuss this farther. Just to say that if the Palestinian pole is akin to Kebaran-Natufian-PPNA, then the other main detected cluster, shared abundantly by everyone in the region, could well be akin to PPNB.

In any case, the result is that, no matter how deep you go, Sephardi Jews are not clearly distinct from other West Asians, specially not from Cypriots and most often than not also not distinct from Turks. The main difference is certain very weak and slippery relation with Palestinian and other Levantines.

Particularly, component K5 (pop4 in the Fst table, blue in the bar graph), which I labeled as Palestine1, stroke as quite interesting. This component is most common among Palestinians (15% at K=6) but second most common among Sephardi Jews (5%), being smaller among all other populations analyzed. It is possible, I speculate, that this component is a remnant of a genetic link between the Palestinian population, long ago of Jewish religion and identity most likely, and the Diaspora Jews, most of whose ancestry seems to have other origins.

It would be, in this regard, most interesting to analyze genuine Palestinian Jews, descendants of those c. 10% Palestinians of Jewish religion who existed before the Zionist colonial project began, sadly even this notion of Palestinian Jewish has vanished or been erased, even if it was once common enough.

Regardless, in almost everything else, Sephardi Jews are identical to Cypriots and Turks, what suggests that my idea of Western Jews having originated not in Palestine but in the Hellenistic Diaspora, which was largely product not of emigration but of proselytism (and in this context early Christianity was just a Jewish sect of messianic character).

It remains to see how Ashkenazi and Moroccan Jews fit in this description. But while I had to renounce to analyze them, all the previous data strongly suggests that they are not too distinct from Sephardi Jews and should share at least partly that same origin, followed by intense bottlenecks.

Update (Jan 11): before I forget, I must mention this other paper (that I did not know about) mentioned by PConroy in the discussion:

The author finds Eastern European Jews (the bulk of Ashkenazim) to be of essentially European origin mtDNA-wise, with special mention to Italy.
Posted by Maju at Monday, January 02, 2012