[Important caveat: apparently both Egyptian samples are from the Delta region, the one most affected historically by Eurasian influence. The one labeled Egypt or Egypt (1) is Henn's sample (n=18), while the one labeled  egyptan (sic) or Egyptian (2) is Behar's (n=12)].

Some readers questioned whether the strong Iberian affinity apparently found in Egypt in the previous Admixture run focused on North Africans was actually masked Highland West Asian or otherwise non-Peninsular Arab West Asian influences. I was initially skeptic because I had expected by default that Saudi Arabs would represent better all possible West Asian influences than Iberians.

I was mostly wrong as shown here.

Methods: I just run Admixture for K=4, K=6 and K=8 on a selection from the 1000 Genomes sample, following GNXP's instructions and using the following populations: both Egyptian samples (n=18 and n=12), plus 10 individuals from each of the following populations: Spaniards, Moroccans, Maasai, Ethiopians, Saudi Arabs, Palestinians, Turks and Kurds. The selection of Maasai and Ethiopians to represent Tropical Africans was made because previous research (mine and Henn's) showed these two being, of the available samples, the ones to best represent ultra-Saharan influence in Egypt specifically.

Results: I am showing only the K=8 results because the lower K levels do not seem overly informative (if anyone wants them, feel free to ask). 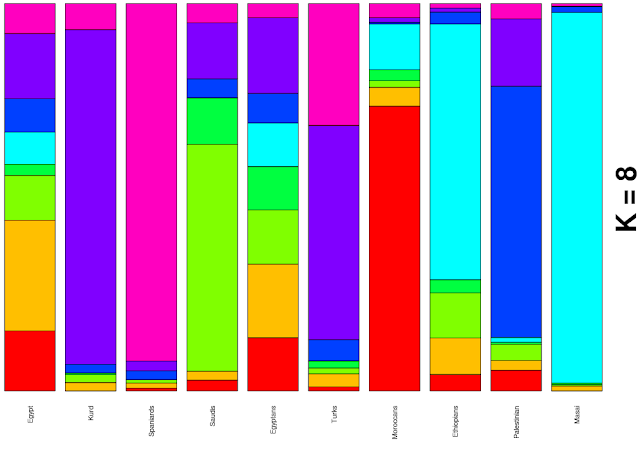 2. The K=8 numerical apportions (same as above but in figures, minimally edited by me to improve visualization):

There is (and I could eventually detect) an Egyptian-specific component, of West Eurasian affinity (look at the Fst table), what implies that it's surely descendant of the pre-Neolithic Egyptians of Asian origin. Paleolithic Egyptians that I presume existed based on other genetics (mtDNA X1, M1 and such), as well as Eurasian-like iconography like the Qurta rock art, similar to materials from SW Europe and Anatolia (but admittedly the Egyptian Paleolithic, with a few exceptions, is not well known on archaeological grounds being such a sedimentary and then desertic area overall, and also because archaeology in Egypt has been largely focused on the quite impressive pharaonic period).

This Egyptian-specific component represents 29% of one sample but only 19% of the other one, being also of some relevance in Ethiopia (9%). This and other differences between the two samples suggest some structure to be unveiled within Egypt but I lack the means (diverse enough samples) to do it. Anyhow the two samples are only somewhat different.

Besides this component, Egyptians show a diverse array of external influences, possibly Neolithic immigrants (?). The most important ones are the Kurdish or Highland West Asian component (17-20%) and the two Arab components together (14-25%) but others (Berber, Palestinian, East African) are also quite influential. The Iberian influence was largely a mirage (although still weights 4-8%).

Among the other populations, the most interesting finding of this run is that the Maasai appear, unlike in other research, to be 96% themselves (but still less distant from Eurasians than the average Tropical African, which is in the Fst=0.2 range), with at most residual admixture from Eurasians (mostly Egyptian/Palestinian). Ethiopians in turn appear here as somewhat admixed Maasai, with North African (mostly Egyptian) and peninsular Arab influences. However my previous relevant exercise showed that, at sufficient K-depth (or with a different sample strategy), Ethiopians eventually converge in their own specific and dominant genetic cluster (91%), which, as in the Fulani case, is similarly distant (and not too distant) to West Eurasians and Tropical Africans, indicating (I understand) very ancient homogenized intercontinental admixture. It surely requires an specifically designed run to understand these matters well enough.

Also notice the Arab 2 extremely distant Fst values, in the >0.2 range. On first impression I thought they were the Maasai component for that reason but nope. We may be here before another OoA remnant, which is very relevant in Arabia peninsula and also in the second Egyptian sample (c. 12% in both cases) and totally absent in Iberia instead.

In any case, it is again evident that different sample strategies can produce quite different results and therefore it is good to look at these matters with an open mind and many complementary perspectives.

Update: K=4 and K=6 graphs, for the record and because some kind of speculation may have some use for them: 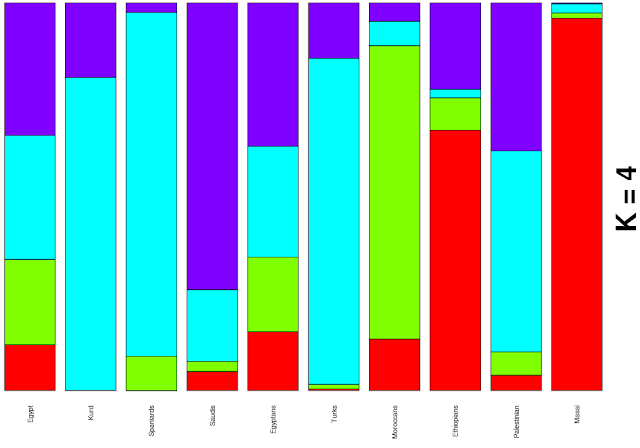 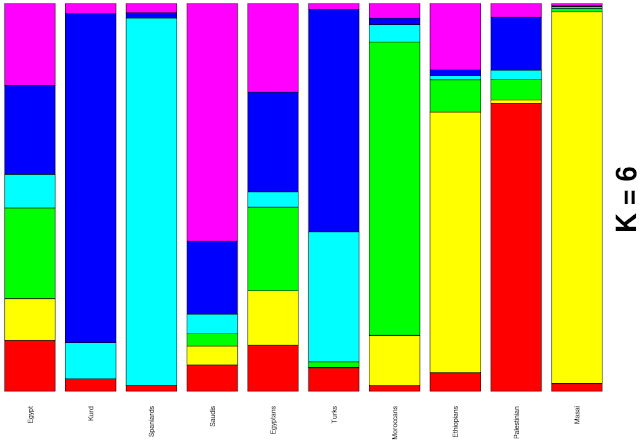 Update (Feb 1, after realizing that both samples are from the Delta):

The finding of an Egyptian-specific component may be even more relevant further South. If some areas of the Delta have retained some 30% of this component, it's probable that it'd be even better preserved towards the interior. On the other hand I'd also expect more Tropical African influence further South but that should be at least balanced by a significant decrease of (post-)Neolithic West Asian influences.

Of course only real samples will provide real answers.
Posted by Maju at Monday, January 30, 2012