Ethio Helix mentions today a rather interesting study (potentially, as it is behind a paywall) on the expansion of mtDNA L3 in Africa and its relation with the migration Out of Africa of L3-derived lineages M and N.


Pedro Soares et al., The expansion of mtDNA haplogroup L3 within and out of Africa. Molecular Biology and Evolution, 2011. Pay per view.

Although fossil remains show that anatomically modern humans dispersed out of Africa into the Near East ∼100–130 ka, genetic evidence from extant populations has suggested that non-Africans descend primarily from a single successful later migration. Within the human mtDNA tree, haplogroup L3 encompasses not only many sub-Saharan Africans but also all ancient non-African lineages, and its age therefore provides an upper bound for the dispersal out of Africa. An analysis of 369 complete African L3 sequences places this maximum at ∼70 ka, virtually ruling out a successful exit before 74 ka, the date of the Toba volcanic super-eruption in Sumatra. The similarity of the age of L3 to its two non-African daughter haplogroups, M and N, suggests that the same process was likely responsible for both the L3 expansion in Eastern Africa and the dispersal of a small group of modern humans out of Africa to settle the rest of the world. The timing of the expansion of L3 suggests a link to improved climatic conditions after ∼70 ka in Eastern and Central Africa, rather than to symbolically mediated behavior, which evidently arose considerably earlier. The L3 mtDNA pool within Africa suggests a migration from Eastern Africa to Central Africa ∼60–35 ka, and major migrations in the immediate postglacial, again linked to climate. The largest population size increase seen in the L3 data is 3–4 ka in Central Africa, corresponding to Bantu expansions, leading diverse L3 lineages to spread into Eastern and Southern Africa in the last 3–2 ka.

As always, take the age estimates with lots of spices: they are just educated guesses which will vary wildly depending on the assumptions made a priori, like the usually under-estimated time for the divergence of the Pan-Homo genera, etc.

But otherwise the paper appears very much coincident with what Behar and myself (based on his data) could have inferred, including a NW African specificity of L3k, it seems.

Their reconstruction of the spread of L3: 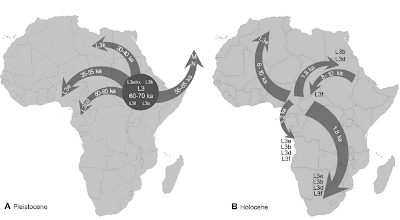 For many more details, you should visit Ethio Helix' original entry: The Mother of Mothers!
PS- As contrast to Ethio Helix' "too white" (in my opinion) selection of Ethiopian portraits, I have located some real women from non-Semitic Ethiopia, which may give a better idea of how the women of the L3 clan looked originally:
Hamer girl (from the SNNPR):

Gumuz mother (from the Benishangul-Gumuz region): 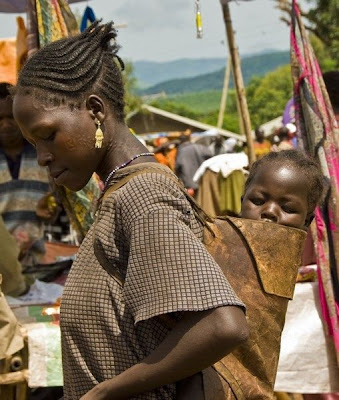 Nuer woman with their characteristic scarifications (from the Gambela region and nearby South Sudan):

Oromo woman (from Oromia, the largest region of Ethiopia):

Email ThisBlogThis!Share to TwitterShare to FacebookShare to Pinterest
Labels: Africa, African genetics, mtDNA, out of Africa