North African genetics through the prism of ADMIXTURE

I believe that with this exercise, which took me just a morning's time, I'm walking a path that has not been explored before: analyzing the autosomal genetics of North Africans on their own right, without  being part of a larger context, be it African or West Eurasian or global. At least I'm not aware of any such paper nor self-research exercise in the blogosphere either.

Said that, I did get in the study five exogenous samples, in order to estimate possible external influences. These are: 10 Fulani, 10 Mandinka, 10 Ethiopians, 10 Saudi Arabs and 10 Spaniards. I did not alter the diverse HGDP North African samples (including two different Egyptian samples), except for two things: I removed the Moroccan Jews altogether and cut the Mozabite sample to 10 individuals, because of suspicion that their alleged isolation might distort the larger analysis.

More or less as I expected, at K=10, which was my preliminary goal, each of the exogenous ethnicities described one distinct component, while the other five components were North African specific.

What I did not expect at all was that Tunisians would show up as distinctive as they did (see below). I wonder if there is something special in that sample or if the measure applies to all (or most) Tunisians. Very strange and unexpected in any case.

In the end, concerned that I might be missing something of relevance, I made two more runs and one of them struck "genetic gold", it seems to me: a small South Moroccan component very distant from everything else, which might well be a remnant of the Aterian period or something like that.

Method: I used a fraction (as described in the previous lines) of the global HGDP sample following the method explained at Gene Expression to operate ADMIXTURE and associated programs (Plink, R). 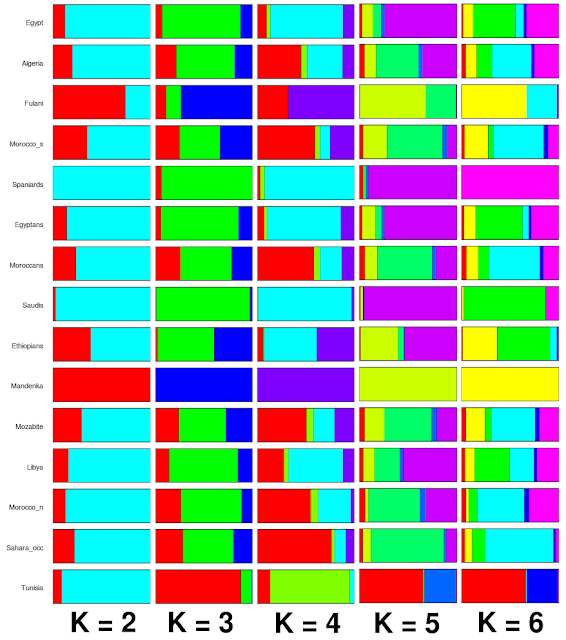 K=3 - Big surprise: the first North African specific component is concentrated in Tunisia, not Morocco, not Mozabites... but Tunisians, uh?

K=4 - As another North African specific component (red, most common among Sahrawis, then Moroccans) shows up, the Tunisian component (green) retracts, so to say, to the Tunisian borders.

K=5 - Not happy with one, the algorithm finds a second Tunisian component, restricted also to that country. I'm as perplex as you may be. 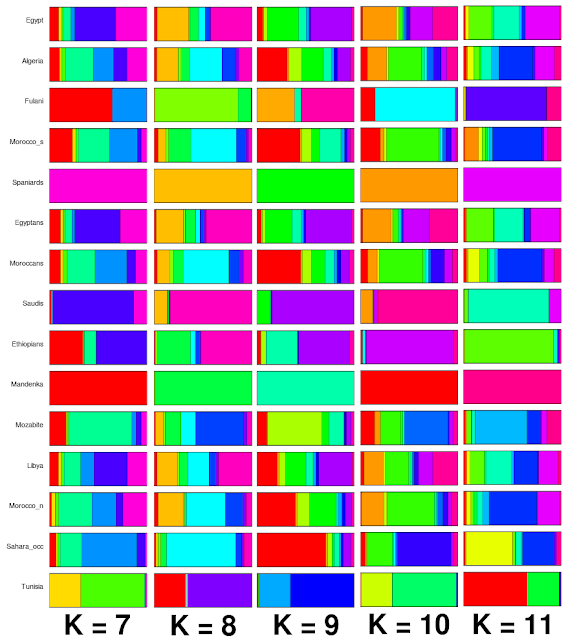 K=7 - Second (non-Tunisian) NW African component shows up. This one (turquoise) is most concentrated among Mozabites.

K=8 - A Fulani-specific component shows up. Intriguingly it is almost equidistant by Fst measure from the Mandenka and the Sahrawi components (0.105 and 0.115 respectively). All the North African specific components are much closer to West Eurasian ones than to the Mandenka component, so this might suggest a very old kind of trans-Saharan admixture, then homogenized in a single component.

K=9 - Not happy with one, the Fulani show a second component in a row. This one is neatly Tropical African (very distant from all and only somewhat close to the Mandinka component and the other Fulani component but at the 0.163 and 0.173 Fst values, which is also very distant). I imagine that this has to do with the Fulani L1b mtDNA lineage but never mind because the component will vanish again as we move on.

K=11 - A small and very interesting component exclusive of South Morocco shows up.

(Note: at K=12 there is a third Tunisian component, go figure!, but I don't think that is informative at all so it's not shown).

Note: A reader suggested that some North Africans in these samples are heavily admixed with Tropical Africans, distorting the results in that aspect. I can't say but, if I manage to get working the program variant that should show individual instead of population bars, then we will find out.

Notice please that the South Moroccan component is extremely distant to all (Eurasians and Africans alike). I will speculate (as I have done before seeing this) that this component, now almost only restricted to Southern Morocco and heavily admixed, is a residue of the Aterian period and is related to a vaguely "Khoisanid" or equally vaguely "Mongoloid" phenotype found in the region. 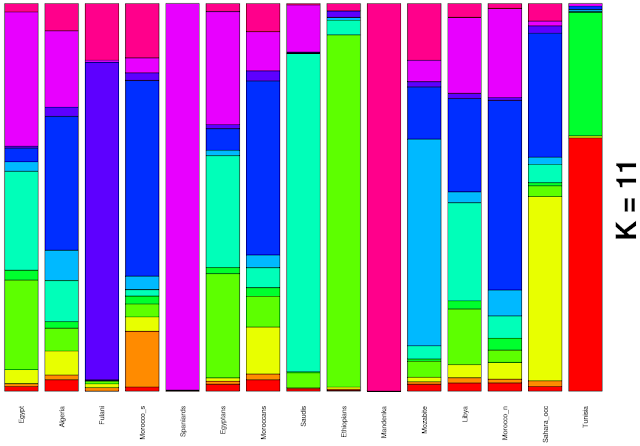