Or should I say Caristian territory, year one of the Hispanic Era?

Actually it was probably the year before or maybe even two years earlier: 40-39 BCE according to the best estimations but the case is that a battle took place in the municipal territory of  Kuartango, not far from Vitoria and Bilbao and the ancient city of Veleia, where many Basque and Vulgar Latin short inscriptions have been found.

I was totally oblivious to this historical-era archaeological episode until I read about it yesterday at Iruina[es] blog and then at Euskonews[es] (dated in 2006). It seems that some 1500 Roman legionaries (1200-1800, known by the size of the defensive castrum erected) were attacked and defeated by local tribal troops in what was the prelude to the Cantabrian Wars, a decade later.

While this prelude is poorly known to historians it must have been of some importance because Octavian (Augustus) declared the year 38 BCE as the first one of the Aera Hispanica, a chronology that was used in all Iberia (i.e. Hispania before the name was monopolized by the state of Spain) until the Late Middle Ages when the more cosmopolitan Christian calendar began to be used instead. And he did so because of the victories that he allegedly attained against the tribes of the North, campaigns of which little is known.

In that year of 38 BCE is known that M.V. Agrippa quelled an uprising by the Aquitani (Northern Basques and proto-Gascons). We can I guess speculate if this battle was caused by (or even cause of) the campaigns of Octavian in the South or that of his commander Agrippa in the North but I can only imagine that this is a trivial distinction and that both are one and the same crushing pressure of the Roman Empire against the Basque tribes overall.


The battle brings to question the myth of Southern Basques being submitted by Rome only or mostly by pacts and agreements. This myth is mostly based on the fact that Pompey camped at what is now Pamplona (Pompaelo) while his rival Sertorius (a supporter of Marius) did in Huesca (Osca), at the final showdown of the Sertorian War. However at that time the Romans battled with many diverse and circumstantial allies, alliances that might have been eroded by the time of this battle. Alternatively, different tribes may have held different relations with Rome and what applies (maybe) to the Vascones needs not apply to the Caristii or other tribes of North Iberia and Aquitania.

In any case the reconstructed battle depicts a siege of a roman military camp (castrum), maybe erected for the occasion, following the pattern of this image provided by Iruina blog: 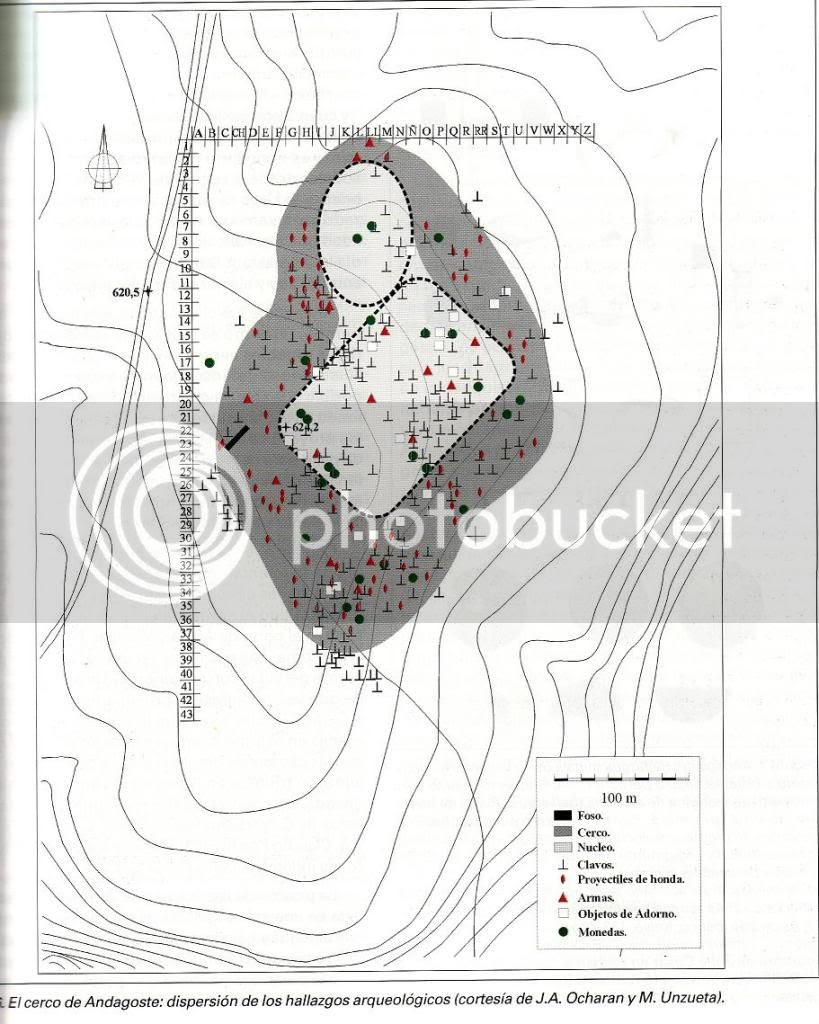 The nails (clavos) are more than 600 used for caligae (military footwear), indicating where Romans lost a sandal and maybe their lives. The coins (monedas), weapons (armas) and slingshot ammunition (proyectiles de honda) may help give an impression of the details of the battle in and around the central fortification (núcleo) and also tell archaeologist of when the battle took place (for example these large shoe-nails were replaced by smaller ones in the Roman legions a few years later, the coins also allow for a quite precise estimate...) The overall estimate seems to be 38 BCE (+/-3 years) but the most exact claims are for the 40-38 BCE period in fact.

Rough chronology of the Roman takeover of the Cantabro-Aquitanian or proto-Basque area:
Posted by Maju at Friday, December 23, 2011