Just fell in my hands, via Pileta de Prehistoria, this paper on the Neolithic of my area:
Miriam Cubas and Miguel A. Fano, LOS PRIMEROS CAMPESINOS DEL CANTÁBRICO: UNA REVISIÓN DE LA INFORMACIÓN DISPONIBLE Y DE LOS MODELOS PROPUESTOS (EARLY FARMERS IN CANTABRIAN SPAIN: A REVIEW OF THE AVAILABLE DATA AND THE PROPOSED MODELS). Férvedes 2011. Available as PDF at Aranzadi Zientzia Elkartea (in Spanish language).
For me it is a great help because I was actually a bit confused about the actual dates and patterns of the arrival of Neolithic, being a bit stuck in obsolete notions of some 20 years ago and unfamiliar with the more recent revisions.
The authors argue that there seem to be two periods in the process of adoption of Neolithic:
Seafood exploitation is a constant that comes from Epipaleolithic and continues through all time boundaries, increasing in some cases (Santimamiñe, Los Gitanos).
The authors also mention the work of A. Alday (2009) on the Mediterranean (or Ebro) Basin of the Basque Country, who concludes that there is population continuity in the initial transition and that a larger change happened in what he describes as the Middle-Advanced Neolithic (Megalithism?) Alday supports population continuity.


I took from this paper fig. 2, which is largely illegible in the PDF, but still obvious enough to be of help. In order to improve visibility I drew red lines on the 6000, 5000 and 4000 BCE marks (from left to right) and a green dashed line to indicate the very beginnings of Neolithic West of Italy c. 5700 BCE (the two older dates are Epipaleolithic, I presume): 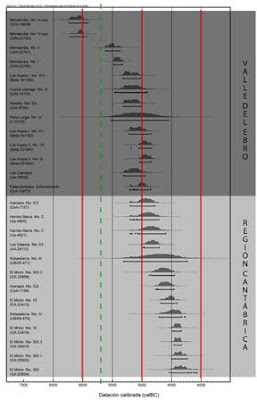 The most important feature is that the Neolithic of the Upper Ebro (dark grey zone) is some 500 years older than that of the Cantabrian strip (light grey).
The first locations with apparent Neolithic north of the Cantabrian mountains are:
All three are dated to c. 5000 BCE (cal.) or 6000 BP (uncal.)
However the following expansion seems focused in the border area between Biscay and Cantabria, with some projection eastwards to the rest of Biscay and Gipuzkoa.
Notice that Arenaza cave (Galdames) is a deeply rooted Paleolithic site, including its dose of rock art.
A complementary material is this article (also in Spanish) at Neolítico de la Península Ibérica on Morales et al. 2010 (ppv). For the purposes of this entry I will borrow the chronology, which is the most complete I have found on Occitan and Iberian Neolithic:

This sets the likely beginning of Western Mediterranean Neolithic at c. 5700 BCE. The fact that the oldest dates are from Aragon (as old as 5800 BCE), an inland region is surely problematic but the rest seem to fit well with a process of very rapid expansion from SE France to Catalonia, the Southern Valencian Country and Andalusia.
For further details on how this may have happened, specifically in the Southern Valencian Country, you may want to read this previous entry.
Posted by Maju at Thursday, November 17, 2011