Again, in short notice, a lot of interesting stuff. Most notably the portrait of the largest bird ever but also a lot of new info on Neanderthal (and Erectus!) Europe, the Iruña-Veleia archaeological scandal, etc.
First of all the giant duck:
Australian Aboriginal Rock Art May Depict Giant Bird Extinct for 40,000 Years : Living the Scientific Life (Scientist, Interrupted) - hat tip to David. The giant bird depicted at Niwarla Gabarnmung is not an emu but a Genyornis newtoni, the largest bird that ever existed. Its extinction date, c. 40,000 years ago, is the most recent possible date for the artwork therefore. 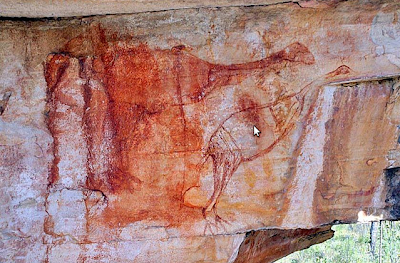 The origins of Neanderthals could be in Atapuerca

Pileta de Prehistoria: Atapuerca hominins could be a sister species to Neanderthals[es]. Actually much more is claimed in fact: that they are more related to Neanderthals than any other fossil known and that, for that reason and because of chronology, they are the best candidate to be the direct ancestors of Homo neanderthalensis.
Academic reference: Aida Gómez Robles et al., A geometric morphometric analysis of hominin upper premolars. Shape variation and morphological integration. Journal of Human Evolution 2011. Pay per view.
A possible issue is that the site of Atapuerca has provided such a huge number of hominin bones that it is very difficult to compare with even the whole collection of all other European sites.
Serbian Homo erectus in the age of Neanderthals

Excavations in Serbia Raising New Questions About Early Humans in Europe | Popular Archaeology.
They have found a Homo ergaster or H. erectus dated to before 110,000 (preliminary dating suggested 130-250,000 years). In this period it was believed that only Neanderthals lived in Europe already. Are these 'erectus' related to the equally mysterious occupation of Crete also before 130,000 years ago?

Update: the reference paper is this one (hat tip to Neanderthalerin):

Franchthi Cave revisited: the age of the Aurignacian in south-eastern Europe << Antiquity. The Aurignacian of Greece overlaps at both sides of the Campanian Ignimbrite Eruption c. 41,000 years ago.

New book in English talks about the Paleolithic of Galicia << La Voz de Galicia[es] - the book can be found online here.

NEWS: Pits with celestial alignments discovered at Stonehenge « The Heritage Journal - more extended at the Birmingham Mail and The Independent.
Pileta de Prehistoria: "Guide to Galician Petroglyphs" presented[es] - the book (in Galician language) can be found here. It is notable that the authors emphasize the similitudes with petroglyphs from other areas, be them in the Iberian Plateau or in Ireland. Faro de Vigo[es] titles: 4000 years ago there was a single language that linked the British Islands and Galicia.


Iruña-Veleia scandal
New step in the legal and scholarly controversy on the exceptional findings at the Vasco-Roman site of Iruña-Veleia: state attorney demands physical tests to Basque Autonomous Police. Previously the defense had asked for them to be made by the Guardia Civil (Spanish military police corps, similar to the French gendarmerie or Italian carabinieri).
Various mentions in Spanish:
Also  in relation to the Iruña-Veleia scandal Iruina blog tells us[es] (with video reports) that some scientists have exhausted their patience with the local politicians and tribunals and the abuses that they are inflicting on this most important archaeological site (not just for the history of Basques but also for that of the late provincial Roman Empire, including the origins of Romance languages and new religions like Christianity and Isianism) and have decided to bring the matter to the international arena, so the finger of shame would point to those guilty of unforgivable archaeological destruction.

Other:
Sandwalk: What William the Conqueror's Companions Teach Us about Effective Population Size - An interesting meditation on key concepts of population genetics, using the well known historical incident of the Norman invasion of England in 1066 that almost turned the Brits into provincial French:

Let's assume that there are 20 well-documented companions [of William the Conqueror]. Only one of these (William Mallet) has possibly passed on his Y chromosome to the present time and even that male line of descent is disputed. This is fully consistent with our understanding of genetics when you consider that most male lines are likely to die out in a few generations. Those that survive ten generations or so are unlikely to become extinct since there will likely be several male lines at that time.

So what were you saying about Genghis Khan?
Jaw size linked to diet: Could too soft a diet cause lower jaw to stay too short and cause orthodontic problems?
Babies show that sense of justice is hardwired.
Posted by Maju at Wednesday, November 30, 2011