There is a lot of stuff accumulating in the to do folder again. I am sure that you will find most or at least some of it interesting.
People who can only read in English may want to consider now subscribing to Pileta de Prehistoria. Until recently most of the materials were in Spanish and largely home-made but since a few days ago, they are compiling a lot of Prehistory-related news, most of them in English. Part of my queue has to do with this change in content.

Laetoli ash walkers may have been unrelated among them: the various individuals of Australopithecus afarensis who walked on volcanic ash at Laetoli some 3.6 million years ago did so in different occasions and may therefore not have been relatives ··> Live Science. 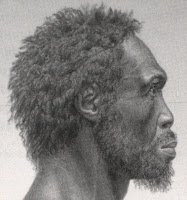 A researcher questions whether Idaltu (Herto man, reconstruction at right) was actually a Homo sapiens. I think that the questioning is very weak, with key vault-height measures that rather make Idaltu outstanding within H. sapiens range rather than approaching Kabwe (H. rhodesiensis), which had a low vault. However the paper has a long list of anthropometric data on various H. sapiens specimens (all West Eurasian ones, except Idaltu) and said H. rhodesiensis which may be of interest for readers, so worth mentioning anyhow ··> Kyle D. Lubsen's PDF at the Journal of Contemporary Anthropology, Neanderfollia[cat].

(Note: nearly all you need to know about anthropometry seems to be in this nice site).

Painted stones discovered in Hohler Fels (Swabian Jura, Germany).  The style of the stones, dated to c. 15,000 years ago resembles that of SW Europe. However no wall mural has yet been located in that region. It was experimentally demonstrated that the dots are not made with either brush or finger but with a wooden stamp ··> SD, Der Spiegel, Qué[es].

Epipaleolithic findings in Rotterdam's harbor. The expansion works for the largest port of Europe have located very small fragments of animal bone (some of which was burnt by human action) and flint stone. Not much but enough to demonstrate human presence in the Western Netherlands in that period, being the first known direct evidence of it ··> Dredging Today, Paleorama[es].

What did cave children do? Sharon Brookshaw has an interesting review on this matter.

Neolithic findings in Qatar are oldest known to date in the Emirate: some flint tools and Ubaid style pottery (proto-Sumerian) are complemented by animal remains of diverse significance: fish bones indicating what they captured at sea, shells used for decorative purposes (right) as well as for food, a dog's canine and even the hearth and the hole for the main pillar of their probably sedentary residence have been found ··> Gulf Times.

No second chamber at Newgrange ··> The Meath Chronicle.

Humor (from Heritage in Action): Norwegian singer Vegard Ylvisåker made a freaky song on Stonehenge. While I don't like the music, the lyrics have some great moments for laughs (in English with English subtitles, just in case):

There are also some awkward moments because any megalithomaniac worth that name knows that Stonehenge is not a henge (rondel) but a stone ring (cromlech) but well...

We also observe that the patterns of recombinational diversity of these populations correlate with distance out of Africa if that distance is measured along a path crossing South Arabia. No such correlation is found through a Sinai route, suggesting that anatomically modern humans first left Africa through the Bab-el-Mandeb strait rather than through present Egypt.

Successful pioneers get some selective advantage... or so it seems from a study of Quebecois surnames (which does not count the fallen) ··> C. Moreau et al at Science (pay per view), SD.
Psychological anthropology

Neanderthal brains were strikingly asymmetric. It is unclear why but their right hemisphere was hyper-developed, at least among those from El Sidrón (Asturias) ··> Sinc[es].

Does the origin of language lay in baby apes' gestures? Not the first time I am told that language began with gestures but, specially if you're unfamiliar with this concept, you may want to read this article at New Scientist.
Posted by Maju at Friday, November 11, 2011