[Update: the paper is open access and I have commented it in some length in a separate post].

R1b1a2 is the former R1b1b2a, which for some odd reason was renamed earlier this year at the reference site YSOGG. As most readers will know this is the dominant haplogroup in Western Europe, having also important presence in the Balcans and West Asia (being instead rare in East Europe, except among Bashkirs). The lineage is particularly concentrated among those peoples that accumulate high frequencies other European-specific markers like blood group Rh-: Basques and Celtic-speaking peoples of the Atlantic fringe. For that and other reasons the lineage has been considered a plausible lineage of Paleolithic origin, as opposed to other genetic markers that may have arrived since the Neolithic onwards.
At the moment all I know is from this BBC article, because the paper is embargoed (and it is unlikely to be published open access - though I hope so). The authors are Cristian Capelli and George Busby. Capelli already dealt in the past with the British Y-DNA landscape producing a work that is quite good quality and a reference that time has not eroded almost at all.
According to the BBC explanation the authors argue that the molecular clock hypothesis is useless and that there is a systematic bias for recent dates in most papers.
But we knew that already, at least I did (I have been arguing that for the last many years). More interesting surely is that their research of a sample of 4500 people shows no difference in diversity within this lineage between West Europe and West Asia.
This is important because the main argument for the Neolithic expansion hypothesis was that there was greater diversity in Anatolia than in Western or Central Europe. To reach such conclusion they had to ignore the internal structure of R1b1a2 and treat all the haplogroup as a single amorphous item, what is extremely questionable, but, if even in such artificial conditions, there is no such greater diversity in West Asia, then we have a very different situation and the controversial lineage may well have expanded from the Balcans, as the recent study by Laura Morelli could suggest.
Another interesting recent paper on this West Eurasian lineage was that of Myres, which explored in some detail the downstream diversity of the haplogroup. These maps may serve as reference, because not everything is the same under R1b1a2: 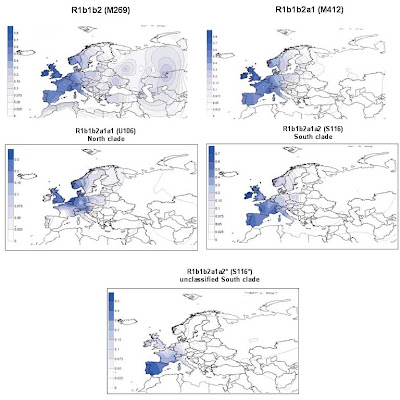 I can't say much more until I get my eyes on the Capelli paper. I am quite sure however that the paper has some elements of interest because the record of Capelli on population genetics is maybe short but impeccable.
See also for background (from more recent to older, from my now closed blog Leherensuge):
Posted by Maju at Wednesday, August 24, 2011