Stories of interest are accumulating at my "to do" folder these days. While I may later on deal with some of them in detail, here there is a synthesis: 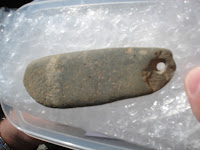 Unusual hanging decorative/utilitarian retouching stone (left) found at Irikaitz (Zestoa, Gipuzkoa, Basque Country). The item has been dated to c. 25,000 years ago, what may well make it Aurignacian (Gravettian is of very late arrival to the area).

Hanging objects of stone are rare and most belong to later periods (cf. Praileaitz of Magdalenian era).

Neanderfollia[cat] mentions that life expectancy seems to have increased dramatically in the Upper Paleolithic. ··> Daily Mail, also discussed at GNXP.

Claims of grave goods indicating when old men became powerful in Traisen Valley (Austria). The study compared burials of the 2200-1800 BCE period (Late Chalcolithic) with the 1900-1600 BCE one (Early Bronze Age). Both elderly women and men gained burial goods  in the later period but men elder were buried with copper axes (quite useless but surely a prestige item), which appears more valuable than the regular axes of young and adult men. ··> Live Science.

A new paper on autsomal variation of Basques in comparison with other populations (by Kristin L. Young, freely accessible at PubMed) is something I want to dedicate some more time when I have it. By the moment:


Neanderfollia[cat] also mentions a research on several full human genomes that estimates that Humankind may have shrank suddenly c. 100,000 years ago, at the same time that the various populations scattered through the world. They also claim that genetic exchange however continued (with Bushmen too) until c. 20 Ka ago. It raises my eyebrows so high that they have melted with my other hair but must mention anyhow. ··> Daily Mail.

Jaw bones shaped mostly by diet, not genes. Narrow jaws indicate soft cooked diet, broad ones a harder type of food. Researched on two isolated Native American populations but IMO lacks controls and it could be argued that the differential evolution is genetically programmed in each population regardless of diet. ··> SD.

IQ-specific genes too diluted to be found ··> Medical Press.

Math ability is inborn (but don't count on the genes to be found anytime soon) ··> SD.

Chimpanzees are spontaneously generous and don't like demanding friends ··> SD.