Forewarning: the maps illustrating this entry are from the discussed paper BUT they seem to fail to adequately capture the actual frequencies of the discussed clades in some areas, notably the Atlantic Islands.

A reader points me to this paper (in Spanish with introduction in Basque):

Starting from a rather unoriginal sample (four Basque provincial samples plus Cantabrians from nearby Valle del Pas) they make some noticeable discoveries on less common mtDNA lineages. First of all they find that haplogroups U5b and J1c have their highest densities among Basques (>10%): 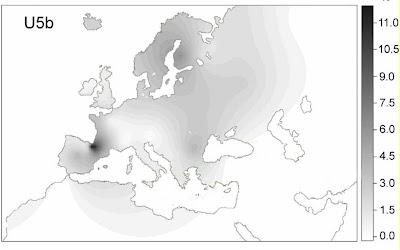 Regarding U5b, a particular sublineage U5b1f is mentioned as being notably frequent among Basques and also found in other sub-Pyrenean populations (Crespillo et al. 2000; Martínez-Jarreta et al. 2000; Alfonso-Sánchez et al. 2008).

The highest apportion of U5b worldwide is in Northern Navarre (15.5%). 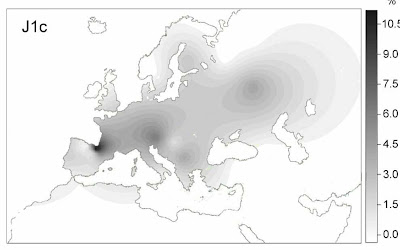 In the case of J1c, it is mentioned in the text that a sublineage J1c2d, defined by a transition in site 16366, is common among Basques and that this particular lineage has also been found in some other populations, specifically the Irish (McEvoy et al. 2004).

Besides these two, the most common mtDNA lineages among Basques are H1, H3 and V. Among these, this paper finds that sublineages H1j1 and V10 are notably common in the country.

Overall and based in an array of older papers, the authors feel that they must support the post-LGM recolonization theory, which would have originated from a Franco-Cantabrian refuge. However they argue that U5b1b, which has been claimed to be of similar origin for being found in remote populations such as the Berbers or Saami (Achilli et al. 2005) has not been found in their survey of (a fraction) of the Franco-Cantabrian refuge. Here I must say that while the datum is surely valid, the argument is somewhat weak however because they have not sampled all the Franco-Cantabrian refuge but just a small fraction: 2/3 of what is now France remain largely unresearched.

[Update: in the comments section, Heraus, who has deep Bearnois roots, confirms my hypothesis: U5b1b may not be found among Basques but it's found for sure among Gascons. Himself is this particular lineage].

This is something that I cannot emphasize too much: in order to understand properly European genetic correlations France, specially the southern half, must be studied properly, because the Basque Country is only a small subregion of that Franco-Cantabrian refuge and the rest of the Iberian Peninsula is not even part of it (excepted Cantabria and Asturias) but a different, less important, archaeological province.


Update: check the supplemental material of a previous paper by the same author. I understand from this paper's text that the samples studied are the same ones.

U5b frequencies by Argiedude (synthesis of many diverse papers):

See the discussion for details. Importantly he argues that he is working in a diversity map but that preliminary data appears to show that U5b in SW Europe is more diverse than in Fenno-Scandia (I'd be surprised if it'd be the other way around, honestly, because this region was covered in ice until some 10,000 year ago).

Not sure what conclusions may be reached, if any.
Posted by Maju at Monday, June 20, 2011