The various options for the migration out of Africa

I want to call your attention to the latest entry at M. Petraglia and colleagues' blog Ancient Indian Corridors. The main focus of this short entry (with open access links to the relevant papers) is the Jubbah site in what today is the terrible Nafud Desert but what really called my attention the most is this other article: Trailblazers across Arabia, where Petraglia discusses not just his own work on the matter of the migration out of Africa of Homo sapiens but also the recent one by Armitage, who proposed a coastal migration via southern Arabia some 125,000 years ago.
This map from that article really synthesizes the various options, even if the matter on when the migration happened (125 Ka ago or more like 90-80 Ka ago) remains open: 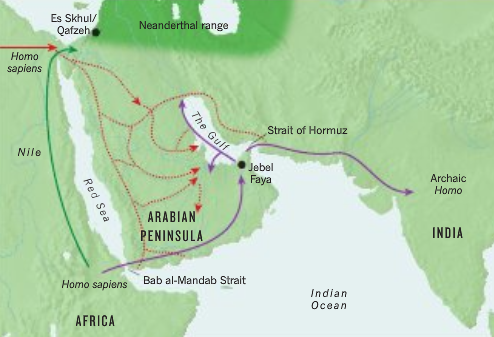 Sadly the Ice Age sea levels are not reflected, for that reason we cannot appreciate that the Persian Gulf was then above sea level, constituting a fertile riverine and swampland region that surely hosted plenty human settlements.
This was addressed by J.I. Rose in 2010 and discussed by me here, among other key papers on the migration out of Africa into Asia.  This map may help understanding better the geography implicated in the OoA: 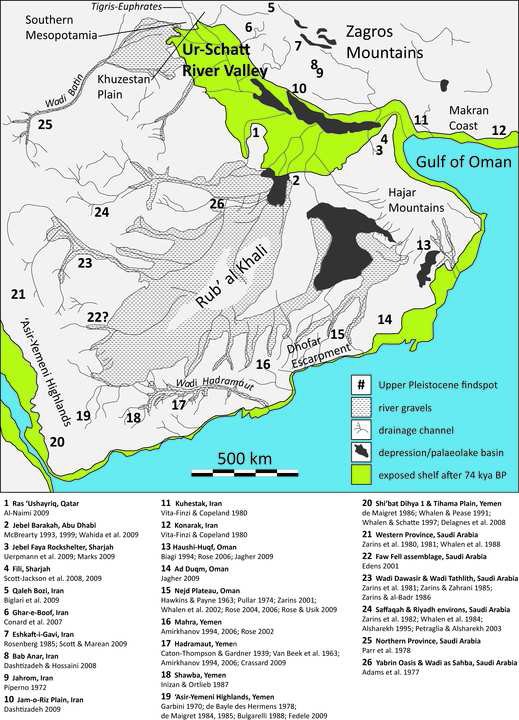 Something that I find fascinating about all this is how we are living in such a key moment of discovery of our own prehistory and how in this particular case Archaeology is following Population Genetics. As you probably know, I am adamant of double-checking genetics-based prehistory reconstructions with archaeology when this one is minimally developed and can provide unavoidable key references. But in the case of the migration out of Africa we were until recently very much ignorant of everything: we knew with good likelihood that humankind had formed in Africa and then... well, there are nice decorated caves in Europe and some controversial skulls in Australia. Between Omo II and Cro-Magnon I, so to say, we were totally amiss (and that's like 160,000 years of prehistory, most of our history as distinct species).
But then, because of certain peculiarities of the distribution of lineages in Asia, some geneticists found themselves forced to posit the theory of the rapid coastal migration out of Africa. The theory posited that our ancestors, or at least some of them had migrated, at least partly, by taking advantage of coastal ecosystems even in relatively arid areas. This coastal specialization allowed these beachcombers and boaters to move faster that any inland route would have allowed, largely able to ignore the difficulties posed by deserts, rivers and swamps alike... and even to cross some narrow sea branches as attested by the colonization of Australia and nearby islands, colonization that must have happened (Genetics seem to say) quite early on in the human adventure in Asia.
This was several years ago and I recall the importance of this discovery in allowing us to understand better the most likely prehistory of our kind across Eurasia. Suddenly all the classical maps, which almost invariably included arrows across Siberia for some odd reason, became obsolete. However there was still no or almost no archaeological evidence. Arabia was not just a desertic region but also seemed an archaeological desert, with very few data, much less reliable one. Even in South Asia, when I tried to find any information on Prehistory, there was not much.
Luckily, in the last years this has changed a lot. And it is still changing: we are learning every other month something new about this key episode of our history as species. So here there go my thanks to Petraglia, Armitage, Rose and all the others who are helping so much in getting us to understand our (pre-)history, what our remote ancestors did, allowing us to be what we are.
Posted by Maju at Saturday, June 11, 2011