There's a lengthy discussion after my latest speculative incursion into the messy field of Linguistics, probably breaking a record in what refers to comments in this blog: 210 so far!
But what brings me to write this note is that in latest comments have partly dealt with the origins of the name of the goddess Aphrodite, also known by her Latin name of Venus, but to Etruscans known as Apru, giving name to the month of April.
The indoeuropeist hypothesis of Aphrodite's name says that it comes from aphrós (foam), reflecting her mythological birth out of the sea foam after the severed testicles of Ouranos fell on it. Reader and linguist Octavià Alexandre argued the following purely IE etymology (for aphrós)

However I protested that rain seems unrelated to foam or surf. And then (not long ago) he provided me with a most valuable tip, that I, ignorant of the subtleties of Classical Greek, could have never figured on my own:

The Greek word can also refer to dribble (Spanish baba).

This immediately ringed a bell in my mind because there's a special word in Basque for it: adur. It is special not just because it means saliva or mucosa but because it also has a very special mythological meaning as the magic fluid of the universe. As such it is present in the name of the Basque river Adur (Adour in French) and probably also in English river Adur and the so many rivers in Europe with the pre-Indoeuropean particle dur- in them.
However I had not expected this element to show up at all in SE Europe or the Eastern Mediterranean. Even if I am familiar with the classical Gimbutist theory of Old Europe and the alleged importance of the fluid and its zig-zag symbols, particularly common in Vinča culture iconography (but also apparent in other contexts and often associated to female sexuality or birthgiving), I had never suspected a relationship with Basque word and mythic concept Adur. 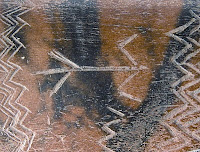 A few days ago Andalusian archaeology blog Pileta de Prehistoria mentioned (following Discovery News) the finding of a "stone age fertility ritual object" in Poland dated to c. 11,000 years ago. I did not give this finding too much importance at first, even if it is curiously a lot older than the better known Neolithic counterparts, but now I feel the need to add it to the evidence in favor of this Adur-Apru pan-European link.
The fertility meaning is explained because of the zig-zag symbols, which are very much like those of Vinča iconography but also because the body proportions of the human icon are feminine, strongly suggesting the moment of birthgiving, a most important cosmological instance for any religiosity connected with reality  (i.e. not pamphletist dogmatic "revealed" religions, like Judeochristoislamism).
Back to Aphrodite, let's remember that she is not any Olympian goddess (not sibling or daughter of Zeus) but obviously related to a pre-Olympian cosmology, fully in connection with the early mythical (and terribly Oedipic) struggle between Kronos (Saturn) and Ouranos. Aphrodite is by all accounts a pre-Indoeuropean goddess closer to West Asian goddesses like Astarte, all them associated to the planet we know today as Venus.
Let's recall as well that it was Trojan favor for Aphrodite (and not the less sensual and more Indoeuropean-Patriarchal goddesses Hera, the wife, or Athena, the warrior maiden) the mythological trigger of the war as narrated by Homer. Aphrodite is clearly one of the last incarnations of the ancient Mother Goddess that Gimbutas' often genial intuition found in Old Europe.
So Aphrodite, Apru in Etruscan, might well be the religious embodiment of this perception of the "magic flow" and its sexual and reproductive ("fertility") implications, so important in Neolithic Europe and preserved till Modernity in the Basque Country (then becoming Satanic iconography in some cases, like the black billy goat, thanks to the Inquisition).
Therefore Pelasgian-Etruscan Apru, derived into Greek as Aphrós should be foam, salive, and magic fluid in general. The fluid of life.
Exactly the same as Adur, which is almost for sure a cognate.
Now, which was first, the chicken of the egg? Is Apru or Adur the oldest term? This I live open to discussion. However the Polish Epipaleolithic finding is highly suggestive of a pre-Neolithic and hence Vasconic origin for this concept, which fits well with the fact that at least the ending of Adur looks very much Vasconic (ur is water in modern Basque).

It has been brought to my attention (see comments) that Apru is not the genuine Etruscan name of Venus-Aphrodite, it was Turan instead. Apru was claimed by linguist E. Beneviste as the root of the Etruscan-Latin month of April. In this theory, Apru would not be a genuine Etruscan word but the Etruscan version of Greek Aphrós, shortening of Aphrodite.

So we can pretty much ignore this Etruscan word. Yet all which was said on Aphrós and Adur stand and they are the core of the argumentation here, with Apru being less relevant.

In case anyone has any doubt Octavià does not support this hypothesis of course. I just had to give him credit for opening my eyes to the possible Greek-Basque connection aphrós-adur because I would not have been able to think of it without his suggestions. But he, of course, disagrees with all my conclusions in this entry.
Posted by Maju at Sunday, February 06, 2011