The island of El Hierro (lit. The Iron) is one of the westernmost of the Canary Islands. I have never visited but it seems to be very beautiful, far enough from the Sahara to enjoy a warm yet humid climate. It wasn't far enough to remain uninhabited however and now we get to know something more about its original dwellers, generally known as Guanches (although technically this name only applied to the inhabitants of La Palma originally).

The aim of this study was to establish the genetic studies of the population from one of the most important known aboriginal funerary spaces of the island of El Hierro (Canary Islands), the Punta Azul cave, which harbors remains of 127 individuals. Sixty-one adult tibiae were examined, 32 left and 29 right. Radiocarbon dating yields an antiquity of 1015–1210 AD. We have obtained an overall success rate of 88.5% for the molecular sexing, and of 90.16% for the uniparental markers. Short tandem repeats (STR) profiles were also possible for 45.9% of the samples. This performance is a consequence of the good conservation of the bones in their archaeological context. The mtDNA composition of the sample is characterized by the complete fixation of the H1-16260 lineage. These results can be explained by a mixture of consecutive founding events, a bottleneck episode at the beginning of the colonization and/or as a consequence of genetic drift. Paternal lineages were also affected by these processes but in a less acute way. These differences lead us to propose social behaviors as an explanation for this difference. The maternal transmission of the lineages, mentioned in ethnohistorical sources of the Archipelago, could be an explanation. These results could be in agreement with endogamous practices, but the autosomal STR results indicate a relative high diversity. These results have allowed us to characterize the Punta Azul cave population and see the way in which geographical isolation, the process of adaptation and specific social behaviors affected the aboriginal population of the Island.


And now the interesting stuff, the findings: 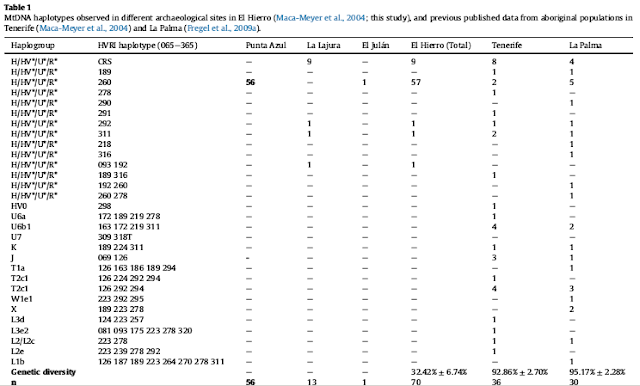 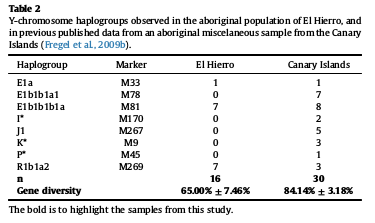 As should be expected, the remote and rather small western island, which is the most direct threat to the security of the USA and the Western World in general because of the danger its volcano may slide into the Ocean and cause a huge tsunami of devastating consequences, something that no nuclear arsenal can do anything against, shows clear indication of very strong genetic drift relative to its relatives of the larger islands, caused either by founder effects and/or endogamous drift. Otherwise it is within the general patterns for the pre-colonial islanders.

We see a lot of likely mtDNA H and certain Y-DNA R1b1a2. The Canary Islands were settled c. 1000 BCE (11,000 HE) by people arrived from what is now Morocco and the Western Sahara. They seem to retain a somewhat archaic genetic pool, relatively rich in Europe-related genetic elements, not so abundant at all today in Northwest Africa anymore, and by this I mean of course very especially Y-DNA haplogroups I and R1b. While we can still find some R1b in NW Africa, haplogroup I is almost impossible to find nowadays, yet it was present in the Canary Islands prior to European conquest and nearly disappeared afterwards (so it's definitely not a colonial input, accidentally misidentified, not at all).