This is an issue that has lingered for a long time in the online anthropology circles. Once upon a time (2005) there was online a presentation in which a good deal of mitochondrial DNA (HVS-I) sequences from the key Iberomaurusian (or Oranian) culture site of Taforalt (North Morocco) were (not too formally) published. Eventually this presentation became almost impossible to find... however now Rym Kefi (the original author if I remember correctly) and colleagues have got back to resurrect that important data set from oblivion, plus sequences from Afalou cave as well.

Rym Kefi et al., On the origin of Iberomaurusians: new data based on ancient mitochondrial DNA and phylogenetic analysis of Afalou and Taforalt populations. Forsenic Sciences Research 2016. Freely available at the time & space of writing this → LINK [doi:10.1080/24701394.2016.1258406]

The Western North African population was characterized by the presence of Iberomaurusian civilization at the Epiplaeolithic period (around 20,000 years before present (YBP) to 10,000 YBP). The origin of this population is still not clear: they may come from Europe, Near East, sub-Saharan Africa or they could have evolved in situ in North Africa. With the aim to contribute to a better knowledge of the settlement of North Africa we analysed the mitochondrial DNA extracted from Iberomaurusian skeletons exhumed from the archaeological site of Afalou (AFA) (15,000–11,000 YBP) in Algeria and from the archaeological site of Taforalt (TAF) (23,000–10,800 YBP) in Morocco. Then, we carried out a phylogenetic analysis relating these Iberomaurusians to 61 current Mediterranean populations.

The genetic structure of TAF and AFA specimens contains only North African and Eurasian maternal lineages. These finding demonstrate the presence of these haplotypes in North Africa from at least 20,000 YBP. The very low contribution of a Sub-Saharan African haplotype in the Iberomaurusian samples is confirmed. We also highlighted the existence of genetic flows between Southern and Northern coast of the Mediterranean. 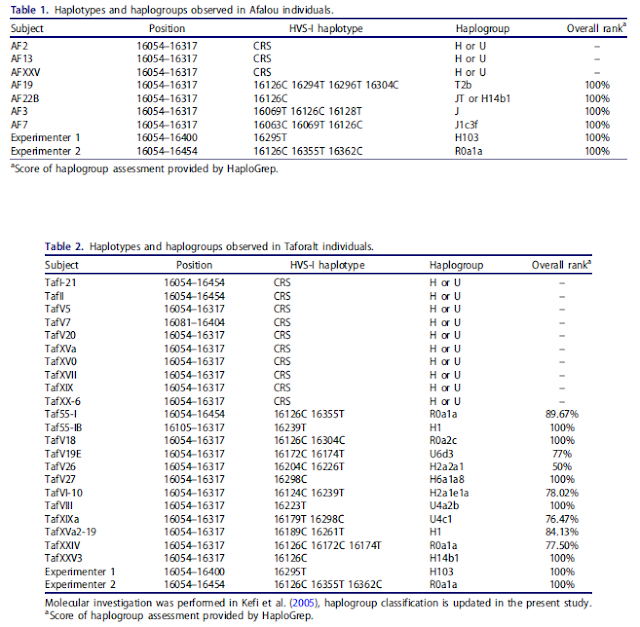 Notice that all sequences are "old style", i.e. HVS-I only, and that's why haplogroup assessment is not always 100% certain, with particular emphasis on the "CRS" sequences, which have been proven in some ancient cases to belong not to the modern normal (H1, rarely H2 o other H) but to a very rare modern haplotype within U*, AFAIK only preserved in Asturias but somewhat common in the Magdalenian of South Germany.

In any case, that they produce 100% safe H1, H6, H14, etc. and, even more surprisingly, J and T2 variants, should make people think about the hidden Paleolithic mtDNA diversity in the wider Mediterranean area. And by this I do not just mean North Africa but also all Southern Europe, including many areas that can't be considered part of the Mediterranean basin, such as most of the crucial Franco-Cantabrian Region, the most densely populated province, by far, of post-LGM Upper Paleolithic Europe, source of several cultural waves (including the Solutrean one, almost certainly at the origin of Iberomaurusian), yet outrageously neglected by research.

Table 5 and other materials in the paper also deal with which modern populations appear closest to the Iberomaurusian ancient mtDNA pool and these are:
Figures in brackets are FST distances, the smaller the closer the match, statistically speaking. Populations in cursive are from Northwest Africa.

That is I'd say quite surprising because we tend to think of those near matches as quite impacted by Neolithic and post-Neolithic inflows, at least judging on other recent research. It seems that the debate on the origin of modern Europeans and North Africans refuses to come to a close, as different aspects of the evidence available may be somewhat contradictory. What do you make up of all this?


Down in the comments' section, Capra questions with good sense the certainty of inferred haplogroups. The most clear one is TafV27, claimed to be H6a1a8, which cannot actually be that (would need another HVS-I marker defining H6, which is missing), however this means that it must be HV0 and possibly V, a lineage that appears (per the aDNA literature) in the European Neolithic, already quite towards the West, out of nowhere, and that "nowhere" should not be West Asia, where it has never been sequenced, unlike K.

I'm therefore reviewing here all the single-marker inferred haplogroups as carefully as possible, please double-check them and report if I seem to be committing any error:

In case you want to re-check, the best resource is of course PhyloTree.


IMPORTANT CAVEAT: the above update was done assuming they had fully sequenced the HVS-I, which is not that long, but it seems that in many cases (second column of the tables above) they have only sequenced up to the 16317 locus, what makes prediction of haplogroup even harder. That would explain their H6a1a8 prediction, although there's no way they can exclude the much more common HV0 (H6 is unheard of in North Africa). Thanks again to Capra for pointing that out.
Posted by Maju at Sunday, January 01, 2017