Tonight I got a most undesirable alert: the controversial archaeological site of Iruña-Veleia, has been again excavated with heavy machinery, with the very possible intent of destroying key evidence.

The area affected by the destructive excavation by the partisan director Julio Núñez is exactly within the bounds of the exceptional graffiti findings area that triggered all the controversy (conservative linguists and historians didn't like what was found, as it challenged their "theories", so they organized an Inquisition of sorts to condemn, hide and even destroy the evidence). The following map published at Ama Ata, shows the original situation of the ancient house upon the intervention by the institutions:

Judging on J.M. Elexpuru's photos, the whole sector has been dug and then recovered with new earth, what is totally not what archaeologists usually do, much less with such a hurry: 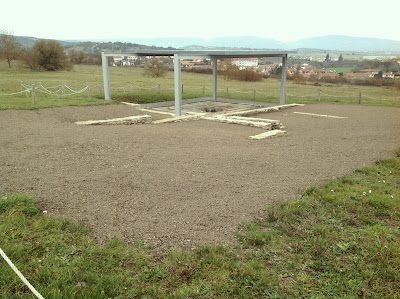 The visual survey of the discard pile shows at least one piece of sigilata pottery and a broken millstone, as well as a common fossil. This is surely just the tip of the iceberg, as nobody by the perpetrators know where the rest of the materials extracted went and what they may have included.

The most likely motivation for this excavation is the throughout destruction of archaeological material, which is potential evidence in the languishing judiciary case against the previous archaeological team, based on nothing but made-up accusations. Not a single piece of actual evidence has been put against them, while their right to defense has been infringed once and again, with pitiful, if not crony, actuations on the side of all involved institutions: a powerless judge, police lab that wash their hands, governments that act in the hiding, manipulating evidence while reporting to no one, researchers that produce junk reports, and then this replacement "archaeologist" who took part in the inquisitorial "expert commission".

Dozens of studies support the authenticity of the findings precisely in this spot, now under destruction. Not a single paper other than those created ad hoc (and belatedly) for the inquisitorial commission, most of them linguists' opinions with zero probatory weight, support the hypothesis of falsehood. However an institutional conspiracy seems determined to do their worst, after all who cares about ancient archaeology and historical truth? Not the masses obviously.

To the list above we must add all those who took part or impelled the inquisitorial commission, notably linguists Joseba Lakarra and Joaquín Gorrochategui and the former Deputy of Culture Lorena López de Lacalle, whose continuous presence (along with her Opus Dei patron R. Larreina and her sister) in the recent electoral lists of supposedly leftist and pro-transparency EH Bildu coalition is most worrisome.