A rather decent analysis of French autosomal genetics has been privately pre-published recently (thanks to Jean Secques for calling my attention to it and to the lead author for making it available online).

A highlight of the study is that the samples all belong to people born in the 1930s and locations refer to their place of birth, so the results should be reflecting the historical demographics of the French Republic in the early 20th century.

There are no supplemental materials available at this point, so it's only possible to get a glimpse of the general results and we can't go too much into fine detail. These general results are anyhow interesting. Let's see:

This figure alone synthesizes the findings: most French citizens cluster in a single unit, which geographically would correspond to NE France (GE region), only SW French (Gascons and Basques mostly) deviate very clearly and roughly fit their own geography towards the Bay of Biscay (or Bay of Gascony, as the French call it). Some samples from the SE (MED and RA regions) also follow this trend. A few outlier samples from the East (GE, RA) look rather Rhenish German, although the lack of controls from outside the Hexagon does not allow me to confirm this appearance.

You may have noticed that I ignored the IDF samples but that is because it is the Paris region (Île-de-France), which was already back in the 1930s too cosmopolitan to be informative. That is of course reflected in all the results with "orange" dots being nearly of all affinities.

Follow the principal component analyses, whose more salient information is again the peculiarity of Southwesterners, i.e. Gascons, Basques, and nearby populations. 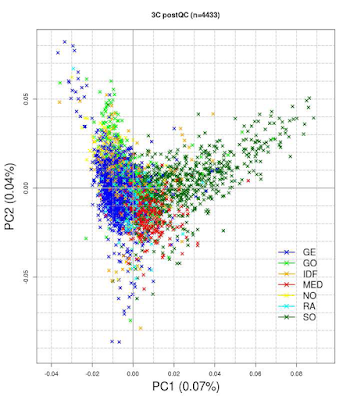 Interestingly there is a prominence of the GO region (Mid-West between the Seine and the Garonne) which may indicate some sort of "Armorican" or "Briton-like" specificity. In appearance it could melt both the "pro-" and "anti-Mediterranean" tendencies but without being able to discern the particular dots (ID and location), I cannot swear for that.

Interested on what you have to say on this one very particularly, reader.
Posted by Maju at Sunday, August 30, 2015