The key element of this study is table 1: 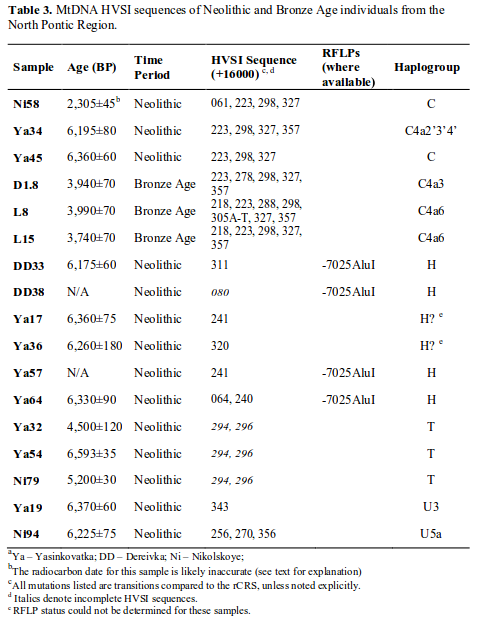 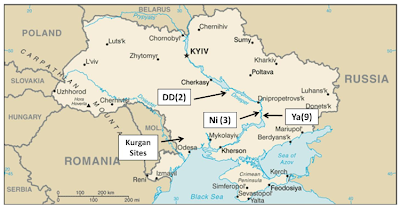 Notice that the "Kurgan sites" (D1.8, L8 and L15) are not from the first Kurgan arrivals but rather from a late layer, surely Srubna culture, which is generally believed to be proto-Cimmerian.

The most striking element probably is the presence of relatively high frequencies of mtDNA C since Neolithic times. However this is not inconsistent with previous findings (Desarkissian 2011) of mtDNA C (C1) among NE European Epipaleolithic hunter-gatherers, surely precursors of modern Finnic peoples. It means that the Siberian element of East Asian affinity today best preserved among Uralic peoples, was present in Europe before Neolithic and that it had an impact (21%) even in presumably non-Uralic populations such as Epigravettian derived Dniepr-Don.

This in turn may well explain the subtle Siberian affinity elements sometimes apparent in much of Northern and Central Europe, because these Eastern European peoples made in turn significant demic impacts in those areas, first with the Pitted Ware culture (clearly derived from Dniepr-Don: similar pottery and burial styles) that affected parts of the Southern Baltic, via Belarus, and later with the Kurgan waves of Indoeuropean-speaking invaders.

Maybe a bit more intriguing is the coincidence of C4a lineages in all the three kurgans of SW Ukraine. It may be just a coincidence or a very specific ethnic provenance of the princesses of that sub-group but the thesis argues for these being direct descendants of the Neolithic C4a lineage found in Ya34. I must say I am skeptic but it is not totally impossible. If real, it would imply that all C4a3 and C4a6 haplogroups (at least) are of Eastern European coalescence, what I find a bit difficult to accept, to say the least - but who knows?

An element in favor of such model is that neither of these C sublineages seems to be present in West Siberian ancient mtDNA, while no Oriental lineages altogether have been found in Central Asia before the Iron Age.