Hungarian ancient DNA and the origins of Central European Neolithic

Davidski leads me to this interesting article where the Neolithic mtDNA of what is now Hungary is detailed far beyond of what I used to know:

Eszter Banffy, German-Hungarian bioarchaeological research project in the Archaeological Institute of the Research Centre for the Humanities, Hungarian Academy of Sciences, Hungarian Archeology, 2013. Open access → LINK 1, LINK 2
Note: the second link, even if unofficial (Banffy's academia.edu page) provides (at least in my browser) with a better formatted PDF.

Most interesting is this map: 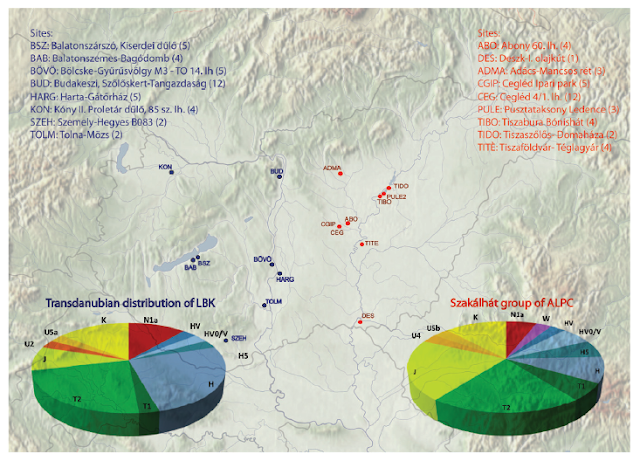 The results are roughly similar to those obtained for early Neolithic Germany. For comparison, to the right there is a pie chart I built recently with the German data (plus one Austrian and another Eastern Hungarian samples, which were already known - H and N1a respectively).

The main difference is the much greater presence of U(xK) in Germany, surely remnant of pre-Neolithic peoples. Otherwise it is quite similar to the West Hungarian pie (consider R* as most likely H, just that untested for the relevant markers). No wonder if we consider that West Hungary (along with nearby areas in Austria, Slovakia and Moravia) is at the origin of the Western Linear Pottery Culture, also known as Danubian Neolithic or LBK.

However the Eastern Linear Pottery of the Tisza basin is generally understood to be at the origin of LBK itself, being somehow transitional between Starcevo (part of the Red & White Painted Pottery complex, originated at Sesklo) and LBK. And we do see some differences with the Western group, notably the Tisza group has much less H (but more H5), less J and also some less N1a.

Lacking by the moment ancient DNA data from Starcevo, Sesklo and other Balcan Neolithic groups at the origin of European Neolithic, we are limited to speculation but I suspect that the greater amount of haplogroup H was incorporated from pre-Neolithic peoples. After all H has been found in great amounts in Paleolithic Iberia (Portugal, Cantabria and Basque Country) and (to a lesser extent) also in Karelia, what clearly indicates that it was present in the European continent before the agricultural revolution, being the Swabian and Baltic cases (no H found to date) probably exceptional in this aspect. On the other hand H was found but only at low levels in Neolithic Kurdistan (15%, up to 23% incl. R*), suggesting it did not come from West Asia (unlike what is probably the case of K, reaching 53% in the Kurdish tells and never reported in Paleolithic Europe).

A similar but stranger case may be that of N1a, found to belong to an exclusively European subclade, nowadays very rare. It's quite plausible that this lineage was restricted to some Central European pockets in the Paleolithic and found occasion for expansion in the Neolithic... only to dramatically recede later on.

It is very worth mentioning that the profile of Eszter Banffy at academia.edu has a lot of papers (many in Hungarian or German but many others also in English) with focus on Central European and Balcanic Neolithic.